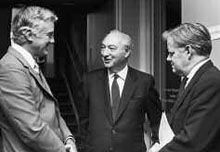 The Shorenstein Center was founded in 1986, but its roots can be traced back to the early days of the John F. Kennedy School of Government. The Kennedy School has been singular in declaring its mission to be teaching and research plus engagement with the real world, something that sets it apart. Early on, leaders at the School recognized that engagement with the press should be part of the School’s focus.

Initially, that role was taken by the Institute of Politics, founded in 1966 with a mandate to inspire young people to careers in public service. Jonathan Moore was a member of the first group of IOP fellows and was chosen to be the institute’s director in 1974. Under Moore the IOP broadened its engagement with the press, conducting research, sponsoring conferences and inviting journalists to Harvard as fellows.

But Moore and others recognized that the topic was too important to be adequately addressed as a subsidiary part of the institute, and in 1980 he drafted a proposal for a Harvard center on the press, politics and public policy. Graham Allison, Dean of the Kennedy School, and Derek Bok, the President of Harvard, embraced the concept with great enthusiasm.

The IOP continued to host events and conduct research on the press and politics, and led the continued fundraising for the new center. These efforts resulted in $5 million in endowment funds for professorships, programs and fellowships.

On March 10, 1985, Joan Shorenstein Barone died of cancer at the age of 38. At the time of her death, she was a producer of The CBS Evening News with Dan Rather. Joan had been inspired to go into political journalism by Washington Post reporter David Broder, who was an IOP Fellow in 1969 when Joan was a graduate student at Harvard. After Joan’s death, her parents, Walter H. and Phyllis J. Shorenstein, sought to establish a memorial for their daughter. In conversations with Senator Edward M. Kennedy, Graham Allison, Derek Bok and Jonathan Moore, the Shorenstein family was persuaded that a Harvard research center dedicated to the study of press and politics would be an excellent tribute to Joan.