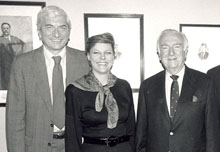 In 1989 the Theodore H. White Lecture on Press and Politics was inaugurated with a panel discussion in the Forum featuring R. W. Apple Jr., Benjamin C. Bradlee and John King Fairbank. Blair Clark, a Shorenstein Center advisory board member and former vice-president of CBS News, worked closely with Marvin Kalb to raise the funds from more than one hundred friends and admirers of the reporter. Honored the next year was legendary broadcast journalist Walter Cronkite. Since its establishment, the Theodore H. White Lecture has become one of the hallmarks of the Shorenstein Center.

The Shorenstein Center’s first Visiting Lombard Professor was Tim Cook. A Williams College professor of political science, Cook taught a course on the press and government in the spring of 1990. The Laurence M. Lombard Professorship was established by the family and friends of Mr. Lombard, a director of Dow Jones & Company for 28 years. Nicco Mele is the Lombard Director of the Shorenstein Center.

Frederick Schauer served as Frank Stanton Professor of the First Amendment from 1990–2008. The chair was funded in the early 1980s by gifts from dozens of media organizations and individuals in honor of Dr. Frank Stanton, president emeritus of CBS.

The chance meeting of a Harvard professor and a Philadelphia lawyer on a beach in Florida led to the establishment of one of journalism’s preeminent prizes, which is awarded by the Shorenstein Center. The professor, Gary Orren, and the lawyer, Robert Greenfield, soon joined with Marvin Kalb to create the Goldsmith Awards Program. The concept began with a desire to encourage strong investigative reporting and grew to include book prizes, fellowships and an annual career award. The Goldsmith Prize for Investigative Reporting, first awarded in 1993, has become one of the most prestigious awards in journalism.

The first occupant of the Bradlee Chair in Government and the Press is Thomas E. Patterson, who arrived at Harvard from Syracuse University in 1996. Benjamin C. Bradlee, former executive editor of the Washington Post, donated funds for the chair in the early 1980s.

Marvin Kalb directed the Center from 1987 until 1999. He formalized the Fellowship Program and expanded the research output of the Center through foundation-funded projects on presidential press conferences, the Pentagon Papers, press coverage of the Soviet Union, race, presidential election campaigns, the Los Angeles riots, China, financial institutions and more. He developed the introductory course on press, politics and public policy, expanded the Kennedy School’s curriculum, and led a program on media and American democracy for high school teachers. With co-editor Pippa Norris, Kalb launched the Harvard International Journal of Press/Politics [now The International Journal of Press/Politics, Sage Publications]. 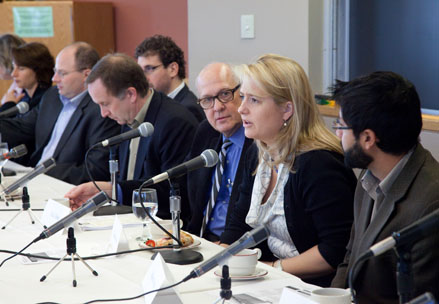 The Pulitzer Prize–winning journalist Alex S. Jones served as director of the Shorenstein Center from July 2000 until July 2015. Jones enhanced the Fellowship Program, raised the profile of the Goldsmith Awards, launched new initiatives to increase student engagement, and broadened the advisory board. He strengthened the financial underpinnings of the Center, with the strong support of the Shorenstein family. Jones convened conferences on new issues such as WikiLeaks, blogging and journalism and the reporting of science.

The Center became one of 12 institutions selected to participate in the Carnegie-Knight Initiative on the Future of Journalism Education. As part of the Initiative, the Center created and operates Journalist’s Resource, a website devoted to knowledge-based reporting.

The Center established the Lynette Lithgow Summer Internship Award, research assistant positions and full-tuition scholarships. The David Nyhan Prize for Political Journalism was endowed in 2005 and is awarded in conjunction with the annual Theodore H. White Lecture. The annual Richard S. Salant Lecture on Freedom of the Press was endowed in 2007, and the A.M. Rosenthal Writer-in-Residence program was established in 2010.