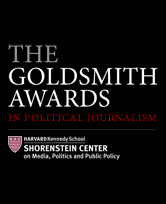 Cambridge, MA — Six finalists for the Goldsmith Prize for Investigative Reporting have been announced by the Shorenstein Center on Media, Politics and Public Policy at Harvard Kennedy School. The winner of the Goldsmith Prize for Investigative Reporting will be announced at an awards ceremony on March 6, 2018, at the Kennedy School. Additionally, Martha Raddatz, ABC News chief global affairs correspondent, will receive the Goldsmith Career Award for Excellence in Journalism and deliver the keynote speech.

The Goldsmith Prize for Investigative Reporting, which carries a $10,000 award for finalists and $25,000 for the winner, is intended to recognize and encourage journalism that promotes more effective and ethical conduct of government, the making of public policy, or the practice of politics by disclosing excessive secrecy, impropriety, and mismanagement, or instances of particularly commendable government performance. The Goldsmith Career Award is given for outstanding contributions to the field of journalism, and for work that has enriched political discourse. Past recipients include Gwen Ifill, Seymour Hersh, Walter Isaacson, and Christiane Amanpour.

“At the local, state, and national level, this year’s Goldsmith finalists exemplify the power of investigative reporting to uncover wrongs and to hold government and business accountable. These stories have saved lives and spurred changes to protect vulnerable populations,” said Shorenstein Center Director Nicco Mele. “In addition to the six finalists, we are also acknowledging The New York Times with a special citation to recognize their reporting on sexual harassment and assault, which has contributed to a significant cultural movement.”

The six finalists for the 2018 Goldsmith Prize for Investigative Reporting are:

Asbury Park Press
Shannon Mullen and Payton Guion
Renter Hell
This investigation exposed the hazardous living conditions of thousands of tenants in New Jersey’s government-supported housing. As a result, the state issued more than 1,800 violations, and two state senators introduced a bipartisan bill aimed at fixing many of the issues brought to light in the series.

BuzzFeed News
Melissa Segura
Broken Justice In Chicago
BuzzFeed News investigated a Chicago detective accused by the community of framing more than 50 people for murder. The findings from the series led to the freeing of an innocent man from prison after 23 years, and authorities reviewed the cases of other prisoners.

NPR and ProPublica
Nina Martin and Renee Montagne
Lost Mothers
The United States has the highest rate of maternal deaths in the developed world; NPR and ProPublica found at least half could be prevented with better care. This series tracked maternal deaths, saved lives by raising public awareness of complications, and prompted legislation in New Jersey and Texas.

STAT and The Boston Globe
David Armstrong and Evan Allen
The Addiction Trade
STAT and The Boston Globe exposed treatment centers, middlemen, and consultants that exploited people seeking addiction treatment, and has led to criminal and congressional probes. Stories ranged from insurance fraud schemes, to poor care at Recovery Centers of America, to patient health put at risk on the TV program Dr. Phil.

The Goldsmith Prizes are funded by an annual gift from the Goldsmith Fund of the Greenfield Foundation.

About Martha Raddatz
Martha Raddatz is ABC News chief global affairs correspondent and co-anchor of This Week with George Stephanopoulos. She has covered national security, foreign policy, and politics for decades – reporting from the Pentagon, the State Department, the White House, and conflict zones around the world, including Bosnia, Iraq, Afghanistan, Yemen, Iran, Pakistan, Israel, and numerous countries in Africa and Asia. In 2012, Raddatz moderated the Vice Presidential debate, and received the Walter Cronkite Award for excellence in political journalism with a special commendation for debate moderation. During the 2016 election, Raddatz co-moderated the Democratic and Republican primary presidential debates on ABC, as well a presidential debate between Hillary Clinton and Donald Trump. From 1993-1998, Raddatz was the Pentagon correspondent for NPR. Prior to joining NPR, she was the chief correspondent at the ABC News Boston affiliate WCVB-TV. Raddatz has received four Emmys and numerous other awards. She is the author of The Long Road Home—A Story of War and Family, which made both The New York Times and The Washington Post bestseller lists and was made into a mini-series for TV.

About the Shorenstein Center on Media, Politics and Public Policy
The Shorenstein Center is a research center based at the John F. Kennedy School of Government at Harvard University, with a mission to study and analyze the power of media and technology and its impact on governance, public policy, and politics. Research, courses, fellowships, public events, and engagement with students, scholars, and journalists form the core of the Center.