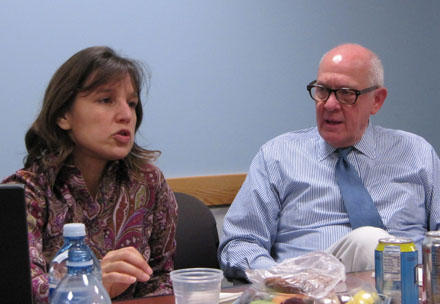 October 25, 2011 — To discuss the impact of technology on citizen and state dynamics, Zeynep Tufekci, assistant professor at the School of Information and Library Science (SILS) at the University of North Carolina at Chapel Hill and a fellow at the Berkman Center for Internet and Society, spoke to the Shorenstein Center about the Arab uprisings and new media ecology.

Throughout history, Tufekci said, humans have lived together in “small groups.” Organization is key in any community, she continued, and smaller groups were easier to organize. Traditionally, the most powerful people in these groups were the ones who were able to coordinate and keep track of others. The “interesting twist” that comes with new media, Tufekci pointed out, is that “coordination and surveillance” is now more available to everyone.

This ability for citizens to coordinate and organize more easily has threatened the power of totalitarian governments, Tufekci said. To retain their power, regimes rely on “pluralistic ignorance,” a term that refers to a group of people who might feel the same way but pretend the opposite so as not to stand out, or be the first one to revolt. This pluralistic ignorance is a “key factor in keeping unpopular regimes in power,” Tufekci said. The rise of social media has provided a way for large groups of people to come together in a “shadow channel” and confidently organize against the regime.

In the Middle East uprisings, Tufekci said, “social media did contribute causally to the crumbling” of regimes, but “not in creating dissent — dissent was already there.” What social media did, she explained, was provide a “mechanism that allowed everyone to overcome this pluralistic ignorance.”

See the full recap on Storify: