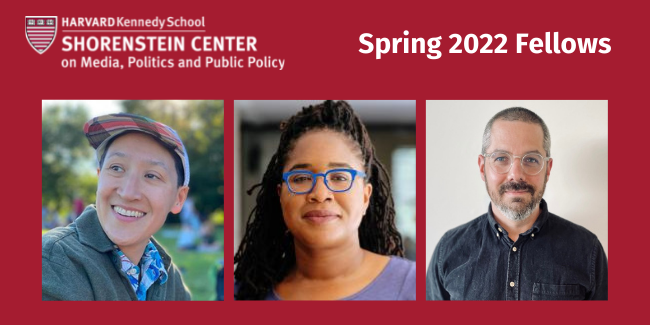 This spring the Shorenstein Center welcomes three new Joan Shorenstein Fellows who will conduct research and student and public engagement on issues relating to the regulation of technology, digital consumer protection, the impacts of algorithmic systems on communites and democracies, and the ways that networked groups of volunteers and humanitarian aid workers respond to major breaking news events.

Learn more about the Spring 2022 Joan Shorenstein Fellows below: 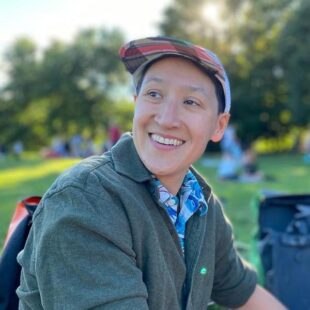 Kasia Chmielinski is the Co-Founder of The Data Nutrition Project, an initiative that builds tools to mitigate bias in artificial intelligence. They are also a Senior Researcher at the Partnership on AI with a focus on machine learning documentation, a Senior Advisor to the Center for Humanitarian Data (United Nations OCHA) specializing in data quality, and an affiliate at the Berkman Klein Center at Harvard University with a focus on dataset standards for responsible artificial intelligence. Previously, Kasia held positions at McKinsey & Company, the U.S. Digital Service (OMB / White House), the MIT Media Lab, and Google. They are also a purveyor of multimedia stories (film, audio) and an avid birdwatcher. When not in front of a computer, Kasia can be found leading a Feminist Bird Club event or cycling uncomfortably-long distances. They received their bachelor’s degree in physics from Harvard University. At the Shorenstein Center they will conduct research on possible governmental approaches to the responsible use of data-driven technologies on consumers. 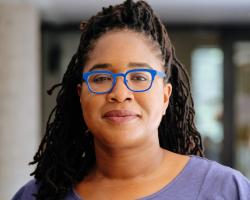 Jasmine McNealy is an attorney and associate professor in Media Production, Management and Technology in the College of Journalism and Communications at the University of Florida, where she is also the Associate Director of the Marian B. Brechner First Amendment Project.

McNealy is an internationally recognized scholar whose research is interdisciplinary, centered at the intersection of media, technology, policy, and law. Of particular focus are the areas of privacy, surveillance, and data governance and the impacts on marginalized and vulnerable communities. Her research has been published in social science, law, ethics, and computer science journals. Her research has been funded by public institutions, private foundations, and private organizations. She is a public scholar who understands the importance of making research explainable and accessible to the wider public. To that extent, McNealy has collaborated with partners in academia, industry, and government, presented to industry, government, and community as well as scholarly audiences, and has translated and published her research in mass media outlets. At the Shorenstein Center she will conduct broad research on productive government approaches to tech-related issues, in particular algorithmic systems.

Gideon Yago began his career as a reporter and producer for MTV News and Documentaries and CBS News. He has participated in Emmy, Peabody and Murrow award-winning broadcasts primarily designed to encourage youth engagement in politics, social activism and media literacy. He was the host, creator and producer of ‘The IFC Media Project’, a documentary series about the news on the Independent Film Channel. His radio and magazine reporting have been published by PRI’s ‘This American Life’, Vice and Vanity Fair. He currently lives in Los Angeles and is a writer and producer for scripted television.

For 18 weeks in the summer of 2021 Yago was a volunteer for a number of successful humanitarian evacuations out of Afghanistan, primarily on behalf of high-risk civilian cases and US and Canadian media assets. His work at the Shorenstein Center this semester will be an examination of volunteer and non-governmental efforts that coalesced during that time period in order to pursue a better model for future humanitarian coordination and resource sharing.