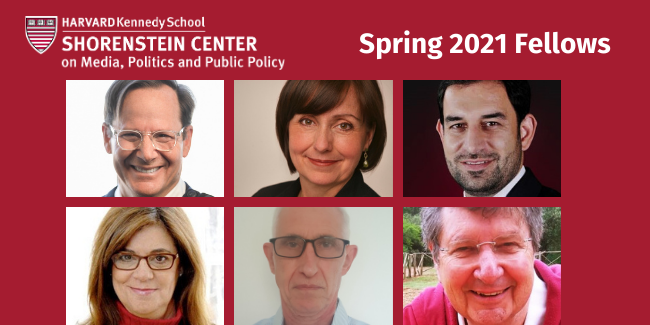 Share on facebook
Share on twitter
Share on linkedin
Share on print
This group of fellows brings experience in reporting, news management, digital media, academia, and philanthropy. They will conduct research on some of the fore-most issues in media, politics and public policy, and hold workshops and lectures for the public and our student community that are sure to drive important conversations.

After taking a pause during the fall semester’s unprecedented upheaval in our world and educational institutions, we are thrilled to be welcoming a new cohort of Shorenstein Fellows to join the center this semester. Though their time with us will not be in person on campus, we value the ability to bring their expertise and insights to our community from across the globe.

This group of fellows brings experience in reporting, news management, digital media, academia, and philanthropy. They will conduct research on some of the fore-most issues in media, politics and public policy, and hold workshops and lectures for the public and our student community that are sure to drive important conversations. We hope you will read more about them below, and follow their work, this semester and beyond.

Craig Forman is a technology, media and telecom entrepreneur and executive. He is West Coast general partner of NextNews Ventures and former president and CEO of McClatchy Co., where he led the digital transformation of such businesses as The Miami Herald, Kansas City Star, Charlotte Observer and newsrooms in 30 cities across America. Earlier, Forman headed Yahoo! Inc.’s News, Finance, Sports and media and information businesses, and was president of the consumer business at pioneering internet-access solutions provider EarthLink. He also served as a senior executive for Internet operations at CNN and TIME Inc. Forman began his journalism career as a foreign correspondent and Tokyo bureau chief of The Wall Street Journal, where he was a finalist for a Pulitzer Prize in 1991 as a member of the reporting team that covered the Persian Gulf War. While at the Shorenstein Center, Forman is working on a project to develop new multidisciplinary approaches and solutions for the challenges facing local news and information.

Robert Walker is Professor at the Institute of Social Management/School of Sociology, Beijing Normal University under China’s ‘High Level Foreign Talents’ program. He is Professor Emeritus at the University of Oxford where he is also Emeritus Fellow of Green Templeton College. He was formerly Professor of Social Policy at the University Nottingham and before that Professor of Social Policy Research, Loughborough University where he was Director of the Centre for Research in Social Policy. His research interests are eclectic but include poverty, social security, children’s studies, media presentation, policy evaluation and research methodology. He is a Fellow of the Royal Society of Arts and of the Academy of Social Sciences and was awarded an MBE by HM Queen Elizabeth II in 2012 for his services to social policy research. While at the Shorenstein Center, Walker will write a paper on understanding China’s response to the COVID-19 epidemic through the lens of local and international media.

Franz Krüger is Adjunct Professor and head of the Journalism department at Wits University in Johannesburg, and director of the Wits Radio Academy. He worked in professional journalism for many decades, including as senior member of the first post-apartheid editorial management team at the South African Broadcasting Corporation (SABC). He holds a BA from the University of Cape Town, an MA from City University, London and a PhD from Wits University. He is the author and co-author of three books, several book chapters, journal articles and many other publications, served as ombud for the Mail & Guardian and on the SA Press Appeals Panel. While at the Shorenstein Center, Krüger will write a paper titled “Disrupted Media – Disrupted Academy: Rethinking African J-Schools”. 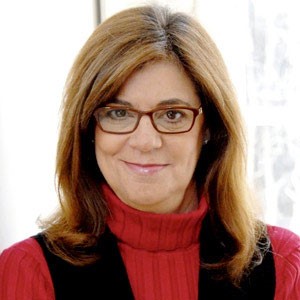 Iris Adler is a former reporter, News Director, and Executive Director for Programming and Podcasts at WBUR Radio. In these roles she reported widely on Boston and New England and helped oversee the station’s news coverage, special projects and national and local programming. Most recently, she created WBUR’s Innovation Lab where she oversaw new initiatives, including the station’s original podcasts and wbur.org’s opinion site Cognoscenti. She has also worked as the Executive Editor at New England Cable News (NECN), where she developed a nationally recognized documentary unit. Over the course of her career Adler has won every major national and regional award for her work in both television and radio, including the Edward R. Murrow award, the Alfred I. Dupont award and several Emmys. While at the Shorenstein Center, Adler will write a paper titled “The Podcast Landscape: A Dearth of Comprehensive, Credible, Daily News?”

Sami Mahdi is the Bureau Chief of Radio Azadi (Radio Free Europe/ Radio Liberty) in Afghanistan. He was previously Director of PAYK Investigative Journalism Center and Strategic Advisor to Tolonews. He worked as C.E.O. of Khurshid TV from 2013-2014 and as Director of News and Current Affairs at 1TV from 2009-2013. He has also been an op-ed contributor to major Afghan and international newspapers and magazines. In 2012, Mr. Mahdi was awarded the Knight International Journalism Award by the International Center for Journalists (ICFJ) for his “excellent and courageous reporting”. Mahdi holds a BA from the School of Law and Political Science of Kabul University (2009) and a MA in International Relations from the University of Massachusetts Boston as a Fulbright Scholar (2016). He currently teaches at the Policy and Public Administration School of Kabul University. While at the Shorenstein Center, Mahdi will write a paper on the role and strategy Afghanistan’s media should adopt in the aftermath of a political settlement with the Taliban. 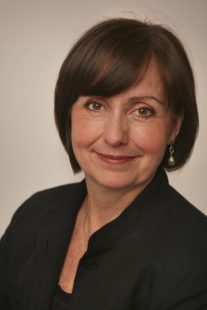 Jennifer Preston was most recently Vice President for Journalism at the John S. and James L. Knight Foundation. For more than six years she oversaw an ambitious expansion of Knight’s portfolio to help address the gaps in local original reporting and equitable community information, halt the spread of mis/disinformation, and fund legal resources for journalists to hold the powerful to account and ensure press freedom. This support helped launch The American Journalism Project, NewsMatch, Report for America, News Revenue Hub, and a number of other journalism initiatives. Previously, Preston spent almost two decades at The New York Times and 11 years at New York Newsday as an award-winning reporter, editor, social media pioneer and senior newsroom executive. She has also taught journalism at the Columbia Graduate School of Journalism and the Craig Newmark Graduate School of Journalism at CUNY. While at the Shorenstein Center, Preston will research sustainable, scalable solutions for local news, and opportunities to increase social impact investments and philanthropic support for journalism.

Justin de Benedictis-Kessner is a political scientist and an Assistant Professor of Public Policy at the Harvard Kennedy School. He researches American politics, with a focus on political behavior, public policy, local politics, elections, and experimental and quantitative methodology. His current research focuses on three areas: how citizens hold elected officials accountable, how representation translates their interests into policy via elections, and how people’s policy opinions are formed and swayed. To read more about Professor de Benedictis-Kessner visit his HKS Faculty page.