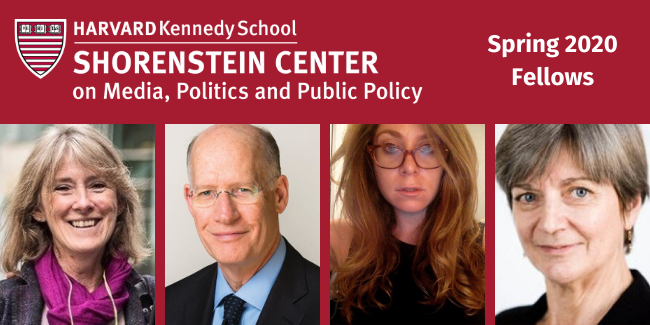 This spring, the Shorenstein Center on Media, Politics and Public Policy will welcome a group of highly accomplished media professionals to Harvard Kennedy School as Shorenstein Fellows. The cohort includes working journalists, academics, and media business executives. They will join the Shorenstein Center as active members of the intellectual community at the Kennedy School, conducting research, engaging with students, and holding public events.

Shorenstein Center Director Nancy Gibbs says, “This group of fellows brings a timely spectrum of experience and expertise to the Shorenstein Center – from journalist-researchers with broad experience in the tech industry and Russia, to seasoned leaders who will think deeply with students about ways to improve the media and our civic discourse. We are thrilled to have them join our Center this semester. We look forward to seeing how their work here helps illuminate the way forward through our fractured information landscape.”

For more information about becoming a fellow at the Shorenstein Center, visit shorensteincenter.org/fellowships.

Ann Cooper has more than 25 years of radio and print reporting experience. She also worked as executive director of the Committee to Protect Journalists prior to joining the Columbia Journalism School faculty, where she retired in 2019 as CBS Professor Emerita of Professional Practice. Cooper’s voice was well known to National Public Radio listeners as NPR’s first Moscow bureau chief, covering the tumultuous events of the final five years of Soviet communism. She has continued to write about the glasnost era, the subsequent decline of press freedom in Russia, and Russia’s global media strategy. Cooper worked as NPR’s bureau chief in Johannesburg 1992-1995, where her coverage of South Africa’s first all-race elections helped NPR win a duPont-Columbia silver baton for excellence in broadcast journalism. Iowa State University, where Cooper majored in journalism, has honored her with its James W. Schwartz award for service to journalism and its Alumni Merit Award, given “for outstanding contributions to human welfare that transcend purely professional accomplishments and bring honor to the university.” While at the Shorenstein Center, Cooper is writing a paper on “Russian Media and the Legacy of Glasnost.”

April Glaser is an investigative journalist at NBC News, covering the technology industry and labor and workplace culture in Silicon Valley. Previously, she worked at Slate, Recode, and Wired, reporting on AI, disinformation and hate online, and social media platforms. Before journalism, Glaser worked at the Electronic Frontier Foundation and various other nonprofits focusing on technology policy. She has appeared on NPR, BBC, MSNBC, and elsewhere. While at the Shorenstein Center, Glaser will study new frameworks for approaching internet policy and keeping users safe online and will report on how data profiling, algorithmic targeting, and weak privacy protections harms specific communities of users.

Don Baer has had a career that spans roles as a media and communications executive for a range of business, government, political and non-profit enterprises. Since 2014 he has been the Chair of PBS’s Board of Directors. He is also the lead independent director and member of the Board of Directors of the Meredith Corporation, a publicly held media company that owns magazines, television stations and online services.

From 2012-18, Baer was Worldwide CEO and Chair of the strategic communications firm Burson-Marsteller, and was Global Chair of its successor firm BCW from 2018-19. Previously he was White House Communications Director and Chief Speechwriter for President Bill Clinton, and helped lead his 1996 re-election campaign. Baer is also a former journalist covering national affairs and politics, a media executive at Discovery Communications, and a lawyer.

While at the Kennedy School, Baer will lead a series of study groups on the potential intersection between public media and the private sector in the national conversation, as well as participate in other activities at the Shorenstein Center, the Center for Public Leadership, and HKS. His fellowship is co-sponsored by the Center for Public Leadership.

Gwyneth Williams recently left the BBC, having been Controller of Radio 4 and 4 Extra since 2011. Before that she was Director of the World Service in English, Editor of the BBC Reith Lectures for many years, and Head of BBC Radio Current Affairs. She started her career at the BBC writing current affairs talks for the World Service and then worked at the Overseas Development Institute before returning to the BBC. She took five years out of formal employment in the 1980s to be with her children. She has published two books, one (co-authored) on Southern Africa, and another on Third World political organizations. Williams grew up in South Africa and was educated at St Hugh’s College, Oxford. While at the Shorenstein Center, Williams will host events that focus on how to get big ideas into the mainstream and make them part of the discussion.

We are also thrilled that two Fall 2019 fellows will be continuing their affiliations with the Center, in slightly different ongoing roles.

Kathy Pham was a Fall 2019 Joan Shorenstein Fellow, and will continue her work at the Shorenstein Center and the Kennedy School as a Research Fellow and Adjunct Lecturer in Public Policy. She is a product leader and computer scientists whose work focuses on product, ethics, responsibility, and technology.