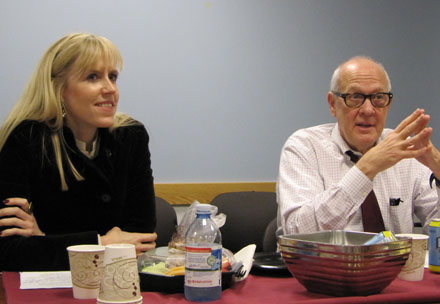 November 15, 2011 — In the final days of Muammar Gaddafi’s regime in Libya, Missy Ryan was held against her will in a Tripoli hotel. Ryan, a military correspondent with Reuters, shared her experience at a Shorenstein Center event.

In the initial days of the conflict, Ryan and about 30 foreign journalists were not allowed to access the government side, only the rebel side. The journalists followed the rebel forces on their “surprise” attacks, which were reported in advance to the media. Ryan said that she and her fellow journalists felt this was an “acceptable risk.” However, as the conflict intensified, soon the “whole city was the frontline,” and the journalists were forced to remain in a hotel, guarded by Gaddafi-supporting volunteers.

Ryan described the experience of reporting from a police-controlled state as “eye-opening” and also “frustrating,” as many of the people they interviewed were coached and often corrected by Gaddafi officials to profess favorable accounts of the regime. Ryan said she was hesitant to approach sources who did not support the regime for fear that they would be arrested or killed. The government publicly referred to the journalists as “spies” and agents of western governments who were “calling in air strikes to NATO with satellite phones,” Ryan explained. Throughout the city, she said, there were “signs warning residents not to trust western journalists.”

Her desire was to provide “a nuanced depiction of Libyan society,” Ryan said, but she found it “virtually impossible to do so” because of the limitations enforced by the Libyan government. Still, she said, it was “important to be there to, in any way possible, challenge the narrative coming from the Gaddafi regime.”

Reflecting on how well the global media covered the Libyan conflict, Ryan said that “the media did pretty well depicting the overall tenor of the conflict and the major military developments,” but “did less well fleshing out who the rebels were…and asking hard questions about their ability to steer the country in a good direction.” “Western media failed to adequately depict the fact that many Libyans truly supported and continue to support Gaddafi,” she continued. By embracing the idea that it was “a society that was 100% oppressed and 100% opposed to this man,” Ryan argued, “we impoverish the debate about what’s coming next in Libya.”