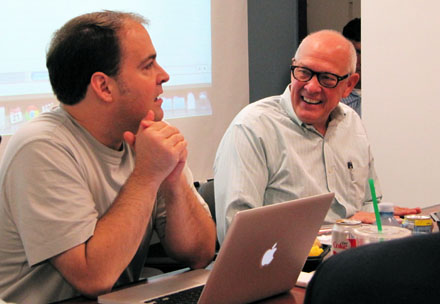 September 21, 2011 — Andy Carvin, Senior Strategist at NPR, presented to the Shorenstein Center a different kind of newsroom: “My Twitter following — they are my newsroom.” He sees himself as an “anchor,” listening to simultaneous streams of information, and providing a “coherent narrative to the public.” Rather than a traditional supporting newsroom, he has over 55,000 Twitter followers who assist in researching and reporting to distill truth from rumors. The result, he said, is a “combination of real-time news and real-time oral history.”

Carvin confessed that he has “always had an affinity for experimenting with Twitter for breaking news,” and recalled September 11, 2001, when he organized a Yahoo group to “separate fact from fiction.” He realized the impact that social media could have on global events when over 2 million Facebook users in Tunisia could participate in their country’s historic rebellion. Afterwards, one of his contacts from Tunisia summed up the launch of the Arab Spring: “Ok Arabs you’ve seen how it’s done in Tunisia; Tag you’re it.”

In Egypt, Carvin noted, there was a more organized group of activists with a “long history of dissent” who had been planning an event on January 25. But the “momentum that started because of the Tunisian revolution,” Carvin said, “kicked them in to high gear.” “What started as casual retweeting on my part for Tunisia became a bit of an obsession in Egypt.” He began to see “history playing out in real time,” and sent out 400-500 Tweets per day — on one day going as long as 20 hours with 1,400 tweets. He realized that his Twitter account was becoming a “conversation,” as he and his followers struggled to discern truth and dispel rumors.

At NPR, Carvin said, they are looking more closely at the past 9 months of Carvin’s Twitter activity, to see when this new type of journalism works and when it doesn’t, and how to “scale it and teach it.” They are looking to build tools that would “triage replies on Twitter…and use algorithms” to filter thousands of replies into a focused conversation. Software developers at NPR are working to create a searchable database of all Carvin’s tweets, and their ultimate goal, he said, is “to make all of this public in some sort of ‘acarvin API,'” so users can create visualizations based on his coverage and his followers’ ground coverage of the Arab Spring.