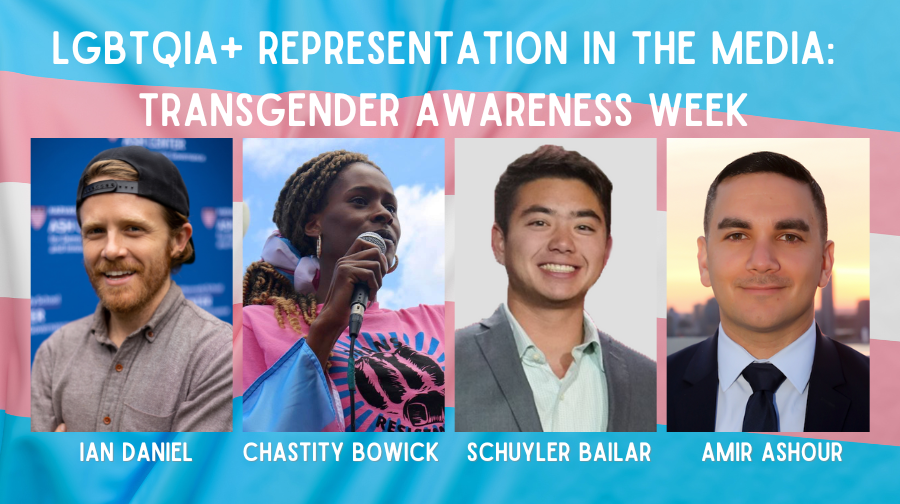 November 14, 2022
This event has passed.
Register
This event, held on the first day of Transgender Awareness Week, November 14, 2022, celebrated the accomplishments of transgender, non-binary, and gender nonconforming people while raising awareness on the bills, policies, structural racism, transphobia, and violence that affects the LGBTQIA+ community and the work that still needs to be done to achieve justice.

This event, held on the first day of Transgender Awareness Week, November 14, 2022, celebrated the accomplishments of transgender, non-binary, and gender nonconforming people while raising awareness on the bills, policies, structural racism, transphobia, and violence that affects the LGBTQIA+ community and the work that still needs to be done to achieve justice. Overall, more than 300 anti-LGBTQIA+ bills have been proposed in 2022, according to the Human Rights Campaign; bills that restrict healthcare for trans people and keep trans youth from participating in sports. Stigma against trans and non-binary people creates long-term impacts on mental health and economic and housing stability. Transgender Awareness Week seeks to raise the visibility of trans and non-binary people and address the issues members of the community face. Sharing authentic, thriving trans narratives in the news and media is a powerful tool for change. The panel discussed these narratives and ways allies and accomplices can take action in the fight for LGBTQIA+ rights.

This event was co-sponsored by the Shorenstein Center on Media, Politics and Public Policy, the Ash Center for Democratic Governance and Innovation, the Harvard College Office of BGLTQ Student Life, the Anti-Racism Policy Caucus, the LGBTQ Caucus, the HKS Alumni Pride Caucus, and the Harvard Gender and Sexuality Caucus.

Ian Daniel is an Emmy-nominated producer, filmmaker, and journalist. He recently co-directed and produced “There’s Something in the Water” a documentary film that explores the topic of environmental racism in Indigenous and Black communities in Canada (World premiere Toronto International Film Festival, NETFLIX). Daniel is the former Co-host and Executive Producer of the Emmy-nominated TV show “GAYCATION” along with actor Elliot Page. An exploration of LGBTQIA+ culture around the world, the series had two seasons on VICE TV and was nominated for Emmy and GLAAD awards for both seasons and won the Imagen Foundation award “Best Informational Program” for creating positive portrayal of Latinos in the media. He reported on LGBTQIA+ issues for VICE and began his journalism career as an Associate Producer and intern at TODAY on NBC in NY. This work earned him “OUT Magazine’s 100 Most Influential LGBTQIA+ People” and “Winq Magazine (Attitude UK) Man of the Year” honors. At the Harvard Kennedy School, Daniel is an MC/MPA ‘23 student, Ash Fellow in Democracy, Co-Editor-in-Chief of the Anti-Racism Policy Journal and Founding Chair of the Anti-Racism Policy Caucus.

Chastity Bowick is an award-winning activist, civil rights leader, and transgender health advocate. She is currently the Executive Director of the Transgender Emergency Fund of Massachusetts, INC. Which is the leading crisis agency for transgender communities in Massachusetts. Chastity is currently a board member at the Boston Women’s Fund, LGBT Senior Housing and was a founding board member of Trans Resistance MA. Chastity has been awarded several accolades for her dedication to community activism, including the 2020 Audre Lorde Trailblazer Award presented by Fenway Health, Trans Resistance MA 2020 Transgender Day of Remembrance Resiliency Award. Get Konnected also named Chastity among the 25 Most Influential LGBTQ+ People of Color in Greater Boston 2020. @tranememergencyfund

Schuyler Bailar (he/him) is the first transgender athlete to compete in any sport on an NCAA Division 1 men’s team. By 15, he was one of the nation’s top-20 15-year-old breast-strokers. By 17, he set a national age-group record. In college, he swam for Harvard University, on Harvard’s winningest team in 50 years. Schuyler’s difficult choice – to transition while potentially giving up the prospect of being an NCAA Champion – was historic. His story has appeared everywhere from 60 Minutes to The Washington Post. Schuyler’s tireless advocacy has earned him numerous honors including LGBTQ Nation’s Instagram Advocate for 2020. In 2021, Schuyler also released his first middle-grade novel, Obie Is Man Enough. And in 2022, Schuyler created LaneChanger.com making gender literacy education accessible to every team, school and company. @pinkmantaray

Amir Ashour is a human rights defender with 10 years of experience advocating for LGBT+ people, women, sex workers, and other marginalized groups. He started IraQueer, Iraq’s first national LGBT+ organization. He led the organization as the Executive Director for seven years before joining the board last year. He is currently pursuing a law degree at Harvard Law School, and has obtained a Masters Degree in Human Rights from Columbia University. Amir has been awarded numerous awards including MTV’s Generation Change Award and the GayTimes Honors. He is currently a graduate student at Harvard Law School. @IraQueer