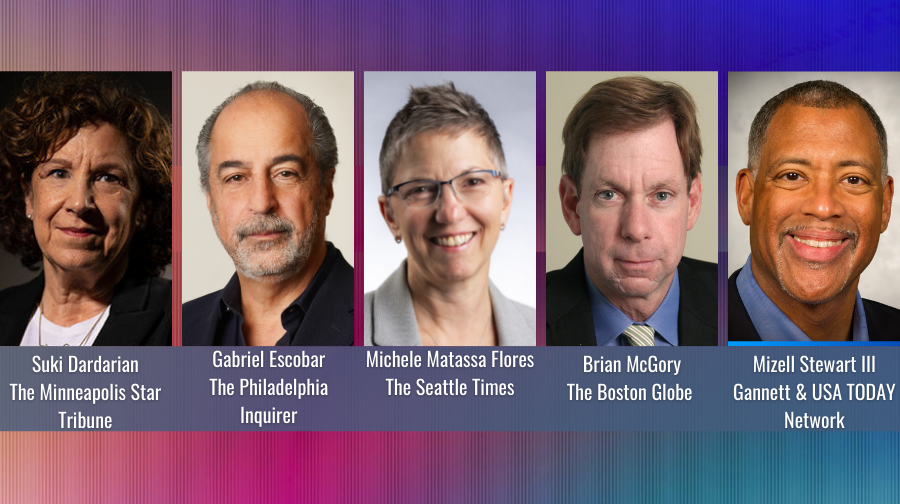 The Digital Transformation of The Metro Daily

May 10, 2022
This event has passed.
The News Innovation Events Series at the Shorenstein Center virtually convenes journalists, news entrepreneurs, policy makers, and funders working on some of the most creative solutions to address the crisis in local journalism and the challenges facing the news media in the age of disinformation at scale. The events in this series are supported by a generous gift from Elaine M. Schuster.

In the aftermath of the collapse of the traditional business model for local newspapers, top editors at the nation’s major metropolitan daily news organizations began accelerating the digital transformation of their news operations and more recently, addressing overdue culture change and the need for racial equity and inclusion in their newsrooms Join as we meet the top editors from The Boston Globe, The Seattle Times, The Minneapolis Star Tribune, The Philadelphia Inquirer and Gannett, the nation’s largest news company, for a discussion about meeting the challenges of today and ensuring a future for journalism.

Jennifer Preston is senior fellow at the Shorenstein Center’s Technology and Social Change Project. Before joining the center as a fellow last year, Jennifer spent more than six years as vice president for journalism at the John S. and James L. Knight Program, where she oversaw a portfolio with more than $200 million in investments for journalism, media innovation and the First Amendment. Prior to joining Knight, Jennifer spent almost 20 years at The New York Times as a senior editor, reporter and the newsroom’s first social media editor. @JenniferPreston

Suki Dardarian is Editor and Senior Vice President at The Minneapolis Star Tribune. She took on the newsroom’s top editing job earlier this year after eight years as the paper’s senior managing editor, where she led the newsroom, digital operations and innovation. She previously worked at The Seattle Times as managing editor and director of audience development. At the Seattle Times, where she was a senior editor for 14 years, Dardarian helped oversee work that earned two Pulitzer Prizes, for breaking news and investigative reporting. She earlier served as a senior editor and reporter at The News Tribune in Tacoma, Wash, and a reporter at The Everett Herald. Dardarian is a former president of the Associated Press Media Editors, a national professional organization.

Gabriel Escobar is Editor and Senior Vice President of The Philadelphia Inquirer. Escobar has extensive experience as both a reporter and news manager. He spent 16 years at The Washington Post, as a reporter on the local and national staffs, a foreign correspondent based in South America and as city editor. At the Inquirer he has worked as managing editor, deputy managing editor for Metro and as assistant managing editor for news. Escobar also worked at The Hartford Courant, The Philadelphia Daily News and The Dallas Morning News, where he was an editorial writer and columnist.

Michele Matassa Flores is Executive Editor of The Seattle Times. She has overseen development of several community-funded journalism initiatives at The Times, and under her leadership the staff won the 2020 Pulitzer Prize for national reporting. Matassa Flores joined The Times as a suburban reporter in 1988 and has worked in nearly every department in the newsroom. Her roles have included business reporter and editor, co-metro editor, deputy investigations editor and managing editor. She left The Times in 2008 and served as co-editor of Crosscut then managing editor of The Puget Sound Business Journal before rejoining The Times in 2013. She became executive editor in 2019.

Brian McGrory is the Editor of The Boston Globe. A 27-year veteran of the Globe, he was previously a Metro columnist and associate editor. Born and raised in Boston and the region, he has also worked as the Globe’s Metro editor, White House reporter, national reporter, general assignment reporter, and suburban reporter. He won the Scripps-Howard award for commentary and the Sigma Delta Chi award for general column writing in 2011. The Globe was awarded the Pulitzer Prize for Breaking News Reporting in 2014 for its coverage of the 2013 Boston Marathon bombings, and has been a finalist in four other categories over the last two years.

Mizell Stewart III is Vice President of News Performance, Talent & Partnerships for Gannett and the USA TODAY Network. He is the founder of Emerging Leaders, LLC, a leadership development consulting firm focused on mid-career professionals and a member of the adjunct faculty of the Poynter Institute for Media Studies, where he was the founding co-director of the Leadership Academy for Diversity in Digital Media. His prior roles include Chief Content Officer of Journal Media Group, Vice President / Content of the newspaper division of the E.W. Scripps Company and senior leadership posts at the Akron Beacon Journal, Evansville Courier & Press and Tallahassee Democrat. A four-time Pulitzer Prize juror, Stewart helped lead the team at The Sun Herald in Biloxi, Miss. that won the 2006 Pulitzer Gold Medal in Public Service for its coverage of Hurricane Katrina.