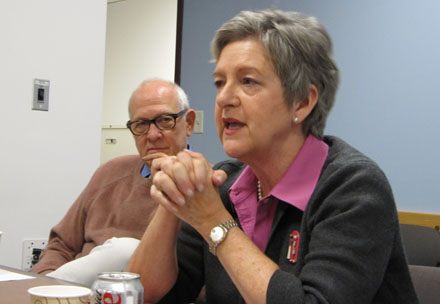 November 21, 2011 — Diana Henriques, senior financial writer at The New York Times and author of The Wizard of Lies, spoke to the Shorenstein Center about how the media covered Bernie Madoff’s family and Ponzi scheme victims. She said that those who invested in Madoff’s scheme are often perceived as guilty, and are portrayed so in the media. Henriques argued that this coverage is unfair and a sign of “timeless tendencies” of wrongful reporting.

Ponzi schemers are different from other white-collar criminals, Henriques pointed out, because “they must first win your trust.” Bernie Madoff, Henriques said, was the “biggest, most successful Ponzi schemer in history,” and his was “the first truly global Ponzi scheme because he hijacked the trust that investors had in other institutions.” How the media portrayed Madoff’s family and victims, however, is a lesson for “how we cover any unpopular targets of public rage,” Henriques said.

The media’s job, Henriques argued, is to “lean against the wind.” “When the gale of public opinion is pushing everybody in one direction,” she explained, “our sacred obligation is to lean back…and make sure justice is done.” She added, “We do it well when the targets of public hostility are poor and defenseless,” but less so when the public is outraged at the “wealthy and powerful.”

There is “no evidence to date” that Madoff’s family is guilty, Henriques stated, and so the media’s description of them as a “crime family” with the assumption that they were all guilty is “not a pretty picture,” she said.

In the Madoff story, Henriques said, the media fell into the trap of creating a “libel-proof” subject: Madoff’s reputation was so destroyed, that no matter how many inflammatory things were written about him, nothing could make his reputation worse.