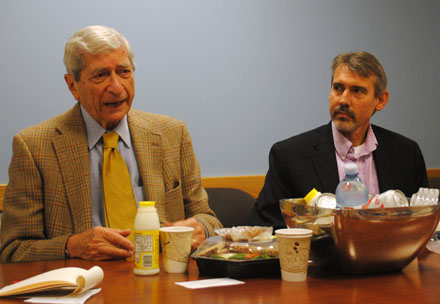 October 11, 2011 — The founding director of the Shorenstein Center, Marvin Kalb, author of Haunting Legacy: Vietnam and the American Presidency from Ford to Obama, revisited the Center to talk about how a lost war still influences White House war policy.

Kalb’s book, which he co-wrote with his daughter Deborah Kalb, poses the question: “When a great power loses a war, and it’s the first war this great power has ever lost…what impact is this going to have?” It “leaves behind a very powerful legacy,” Kalb said.

In covering each of the presidents since Vietnam, Kalb said he learned that “all seven were affected deeply by Vietnam but each responded in a different way.” The “best example of presidential leadership in a time of a national crisis,” Kalb argued, was President George H.W. Bush responding to the Iraqi invasion of Kuwait. Because of Vietnam’s legacy, he said, “Bush followed the Powell Doctrine,” which meant that “if we commit American force, it has to be on our timetable; we will determine when we go in and pull out…When we send troops in, we will send overwhelming force.” The focus was on a “short, quick, massive application of American power, and then out.”

Of the seven presidents, Kalb said that he found Obama “the most fascinating.” Obama was three years old when the Vietnam War began, and 13 when it ended, so “there was no need for him to carry the baggage,” said Kalb, “…and yet.” He continued, “Vietnam absorbed Obama’s thoughts” when visiting Iraq and Afghanistan; “he wanted to learn what not to do.” One of Obama’s first speeches as president explained “why Afghanistan was not Vietnam,” Kalb pointed out.

When asked what lesson could be learned from Vietnam, Kalb answered, “If you’re going to commit American troops to war, know what you’re doing and know a lot about where you’re sending them.” However, he stated that it is “unacceptable to be involved in a war today where the only thing the administration is seeking is a result good enough to be politically acceptable by the American people.”