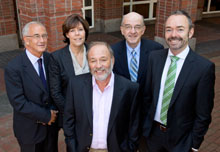 August 28, 2013 – The Joan Shorenstein Center on the Press, Politics and Public Policy, located at the Harvard Kennedy School, is pleased to announce its 2013 Fall Fellows and Visiting Faculty.

“Our Fellows and Visiting Faculty for the fall semester range from one of the nation’s most respected political analysts to a crusading FCC commissioner, from journalists whose experience spans the highest levels of legacy and new media to one of the nation’s foremost pollsters. It’s a gathering of stars,” said Alex S. Jones, the Center’s director.

Shorenstein Center Fellows spend the semester researching and writing a paper, and interacting with students and members of the Harvard community.

Lee Aitken was the political and general news editor at Thomson Reuters, steering feature coverage of the 2012 presidential campaign. She was a consulting editor at The Daily Beast/Newsweek (2008-11) and was Politics Editor at Bloomberg News. At the Shorenstein Center, Aitken will examine press coverage of campaign spending.

Michael Copps served two terms as a member of the Federal Communications Commission from 2001 through 2011 and was Acting Chairman in 2009. Copps served as Deputy Assistant Secretary, and then Assistant Secretary for Trade Development at the U.S. Department of Commerce during the Clinton administration. His research will focus on media policy-making and journalists.

Joe Klein has been the political columnist for Time magazine since 2003. Previously, Klein served as the Washington correspondent for The New Yorker and as a columnist for Newsweek. He is the author of the novels Primary Colors and The Running Mate. While at the Shorenstein Center, he will research the media coverage of veterans.

Stefan Theil is a Berlin-based journalist and editor. Over a 20-year career at Newsweek, most recently as European Economics Editor, he reported from over 20 countries and wrote two dozen cover stories. At the Shorenstein Center, his research project will examine how U.S. and European media covered the global economic crisis.

Peter D. Hart is the Visiting Murrow Lecturer of the Practice of Press and Public Policy for the Fall of 2013. He is one of the leading analysts of public opinion in the U.S. and will be teaching a Kennedy School course called “Polling in the Real World: Using Survey Research to Win Elections and Govern.”

The Joan Shorenstein Center on the Press, Politics and Public Policy is a Harvard research center dedicated to exploring the intersection of media, politics and public policy in theory and practice. The Center strives to bridge the gap between journalists and scholars and, increasingly, between them and the public. More information about the Center is available at https://shorensteincenter.org