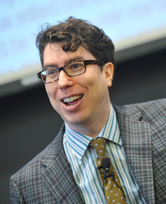 Speaker series on fake news and misinformation, co-sponsored by the NULab at Northeastern University.

Many of the ideas for sifting truth from fiction in news feeds entail Facebook embracing its currently-singular role as a social network. Relying on that centrality may seem efficient and beneficial in the short term, but it’s a recipe for deep trouble in the longer term. This session will explore ways that social networks in general, and Facebook in particular, might mitigate the propagation of misinformation while not relying on their own centralized sets of engineers and algorithms to do the job.

Jonathan Zittrain is the George Bemis Professor of International Law at Harvard Law School and the Harvard Kennedy School of Government, Professor of Computer Science at the Harvard School of Engineering and Applied Sciences, Director of the Harvard Law School Library, and Faculty Director of the Berkman Center for Internet & Society. His research interests include battles for control of digital property and content, cryptography, electronic privacy, the roles of intermediaries within Internet architecture, human computing, and the useful and unobtrusive deployment of technology in education. He performed the first large-scale tests of Internet filtering in China and Saudi Arabia, and as part of the OpenNet Initiative co-edited a series of studies of Internet filtering by national governments: Access Denied: The Practice and Policy of Global Internet Filtering; Access Controlled: The Shaping of Power, Rights, and Rule in Cyberspace; and Access Contested: Security, Identity, and Resistance in Asian Cyberspace. He is a member of the Board of Directors of the Electronic Frontier Foundation and the Board of Advisors for Scientific American. He has served as a Trustee of the Internet Society, and as a Forum Fellow of the World Economic Forum, which named him a Young Global Leader, and as Distinguished Scholar-in-Residence at the Federal Communications Commission, where he previously chaired the Open Internet Advisory Committee. His book The Future of the Internet — And How to Stop It is available from Yale University Press and Penguin UK — and under a Creative Commons license.