2018 Theodore H. White Lecture on Press and Politics: The Press Has Never Been More Vital to the Survival of Democracy 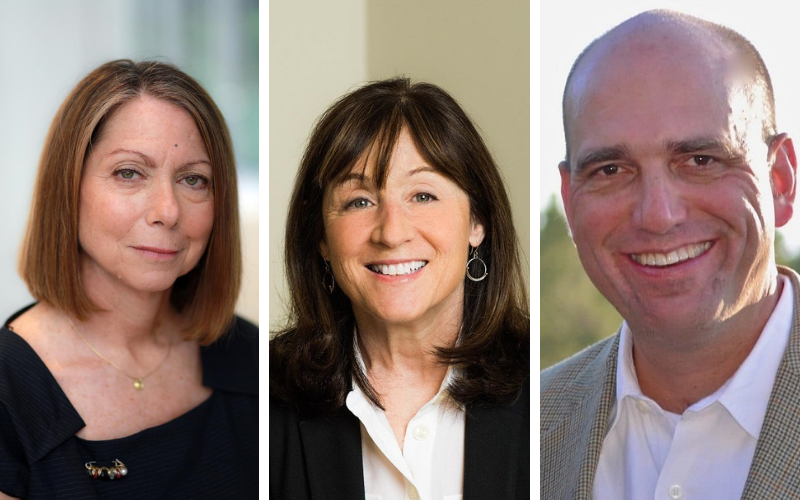 Jill Abramson is a journalist and the first woman to serve as The New York Times’ Washington Bureau Chief, Managing Editor, and Executive Editor. Before joining the Times, she spent nine years at The Wall Street Journal as the Deputy Washington Bureau Chief and an investigative reporter covering money and politics. She is the author of three books including “Strange Justice,” which she co-authored with Jane Mayer. In addition to her current position as a senior lecturer in Harvard’s English Department, Jill Abramson has taught at both Princeton and Yale, where she led undergraduate writing seminars for five years. She is a member of the American Academy of Arts & Sciences and The American Philosophical Society.

Jane Mayer has been a New Yorker staff writer since 1995. She covers politics, culture, and national security for the magazine. Previously, she worked at the Wall Street Journal, where she covered the bombing of the U.S. Marine barracks in Beirut, the Gulf War, and the fall of the Berlin Wall. In 1984, she became the paper’s first female White House correspondent. She is the author of the 2016 Times best-seller “Dark Money,” which the Times named as one of the ten best books of the year, and which began as a 2010 New Yorker piece about the Koch brothers’ deep influence on American politics. She also wrote the 2008 Times best-seller “The Dark Side: The Inside Story of How the War on Terror Turned into a War on American Ideals,” which was based on her New Yorker articles and was named one of the top ten works of journalism of the decade by N.Y.U.’s Arthur L. Carter Journalism Institute, and one of the ten best books of the year by the Times. She is the co-author, with Jill Abramson, of “Strange Justice,” and, with Doyle McManus, of “Landslide: The Unmaking of the President 1984-1988.” In 2009, Mayer was chosen as Princeton University’s Ferris Professor of Journalism. Her numerous honors include the George Polk Prize, the John Chancellor Award, a Guggenheim Fellowship, the Goldsmith Book Prize; the Edward Weintal Prize, the Ridenhour Prize, two Helen Bernstein Book Awards for Excellence in Journalism, the J. Anthony Lukas Prize, the Sidney Hillman Prize, the Robert F. Kennedy Book Award, the James Aronson Award for social justice journalism, the Toner Prize for political reporting, the I. F. Stone Medal for Journalistic Independence, and, most recently, the Frances Perkins Prize for Courage.

In addition, the Nyhan Prize for Political Journalism will be awarded to David Von Drehle.

David Von Drehle is a columnist for The Washington Post, where he writes about national affairs and politics from a home base in the Midwest. He joined The Post in 2017 after a decade at Time magazine, where he wrote more than 60 cover stories as editor-at-large. During a previous stint at The Post, Von Drehle served as a writer and editor on the National staff, in Style, and at the Magazine. He is the author of a number of books, including the award-winning bestseller “Triangle: The Fire That Changed America.” He lives in Kansas City with his wife, journalist Karen Ball, and their four children.