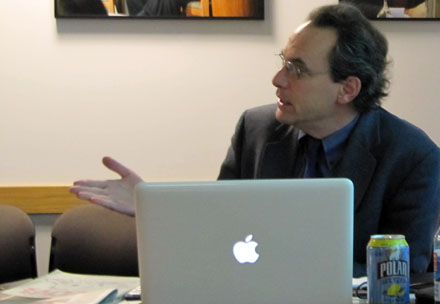 November 1, 2011 — Dan Wasserman, editorial cartoonist for The Boston Globe, describes himself as a “savage” and part of an “endangered species.” The reason there are “fewer than 50” editorial cartoonists today, he said at a Shorenstein Center event, is because of their “loss of habitat: a shrinkage in newspapers willing to put up with a savage.”

Newspapers are “concentrated on the bottom line, and worry about offending readers and losing subscribers,” Wasserman said, and so he is often referred to as the “anti-circulation department,” because of the controversial nature of his work. However, he sees many advantages to his job, one being that he has the flexibility to “bounce around and comment on anything.”

Shorenstein Center Fellow Renée Loth was Wasserman’s previous editor at the Globe, and recalled that during editorial meetings, Wasserman would often participate and provide feedback, usually with a unique perspective. “Sometimes there was an editorial process” on his cartoons, she said, but it was “not as thorough as the written editorials.” Wasserman emphasized the importance of a cartoonist’s relationship with an editor based on trust. The cartoonist has to stand up for the cartoon, he said, and the editor should stand up for the cartoonist. 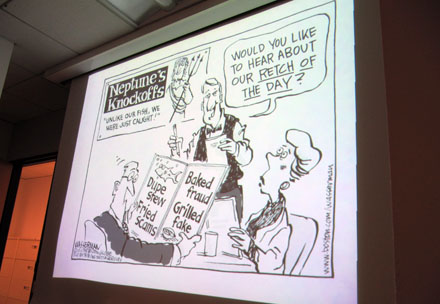 Wasserman displayed one of his recent cartoons

Most of Wasserman’s work, he said, is “political satire” with a “rotating cast of characters: some comical, some infuriating, some moving.” Although he admitted to a “deserved reputation for being left leaning,” Wasserman said he “doesn’t discriminate” and showed examples of his work that critiqued Sarah Palin, George W. Bush and Dick Cheney as well as John Kerry and President Obama.

When asked if political cartoons will survive in a digital age, Wasserman affirmed that there is a “huge appetite” for the art form, and cited the popularity of cartoons on numerous websites because of their “highly visual” nature.