Emily Bell looks outside the field to ‘remake fourth estate’ 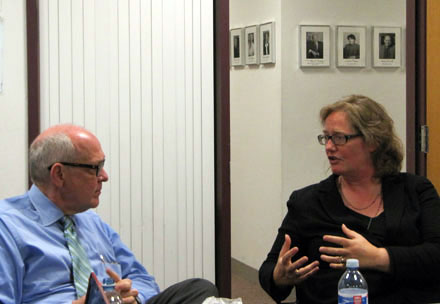 April 4, 2011 — Emily Bell previously worked at the Guardian News and Media as director of digital content and has recently taken a position at Columbia University’s Graduate School of Journalism as director of the Tow Center for Digital Journalism. She spoke to the Shorenstein Center about the importance of bringing in experts outside the field of journalism to innovate the fourth estate.

Before managing digital news at the Guardian, Bell was editor-in-chief of Guardian Unlimited. Her move to web production surprised many of her colleagues, she said. In fact, “people thought I had been sacked,” she recounted. This transition signaled a realization at the Guardian that the web was no longer just an “amplification of what we were doing before” — that it was no longer a place to reproduce print content online.

One of the reasons the Guardian was able to successfully innovate, Bell said, was their belief that the “solutions to what will remake the fourth estate, or what will constitute the free press in the future, lie not exclusively but largely outside the field of professional journalism.” Because the Guardian maintained a “higher tolerance for innovation” than its peers, its technical experts suggested early on to separate “form from content,” which made the publication successful online, Bell said, and freed them from “thinking like the legacy media.” Looking forward, Bell sees technology experts playing as big a part in journalism as editors and reporters. As priorities in journalism shift, she said, user interface and accessibility is becoming as important as editorial content.

Now at the Columbia Graduate School of Journalism, Bell identifies three goals in her work there: “experimentation and research” in the journalism field, “bringing that research to the classroom,” and building a “stronger digital presence for Columbia.” She emphasized the challenge facing journalism now is the need to “diversify the skill set” with experts in “law, technology and digital humanities.” She hopes that the program at Columbia will “be a nexus to bring people in who have that expertise and want to apply it directly to journalism.”

Bell said she is “wildly optimistic about the future of journalism,” but “pessimistic about the business of the news industry, how it is constituted — the framework and infrastructure and number of people employed in it needs to change radically.” She predicted that “in the next 10 years you’ll see a falling off a cliff the number of titles and the number of people employed in print media…it’s unsustainable.”

← The Military and the Media: Two Perspectives—Iraq and Pakistan
Tolbert traces digital inequality to lack of skills and money →