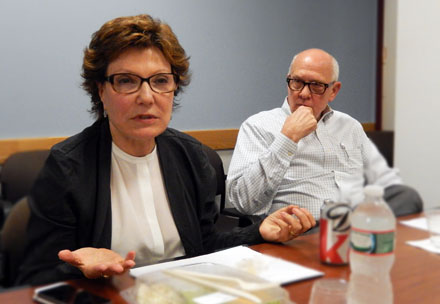 April 15, 2014 – Deborah Amos, Middle East correspondent for NPR, said that in Syria, “there are at least five different wars” going on simultaneously. “It is the most complicated of all the conflicts in the Middle East,” yet the media is criticized for not getting it right.

April 15, 2014 – To assess the media’s coverage of the crisis in Syria, the Shorenstein Center welcomed Deborah Amos, Middle East correspondent for NPR, to share her insights. In Syria, Amos said, “there are at least five different wars” going on simultaneously. “It is the most complicated of all the conflicts in the Middle East,” yet the media is criticized for not getting it right. “It’s not that we didn’t get it right,” Amos argued, “but it’s beyond our powers to explain just how complicated this story is.”

In the current media landscape, Twitter feeds, blogs, citizen journalism and even state-sponsored propaganda outlets are all commonly referred to as mainstream media, Amos pointed out. As a result, she said, the media “are blamed for failure to diagnose or to even offer solutions to these conflicts,” when the sources for reports vary widely.

The situations in Syria, and similarly in Ukraine, have become more complicated than news audiences expected, Amos said. Both cases consist of people who are “tired of a country being run by a handful of oligarchs,” and both cases feature a “ruling class and powerful state media organizations who know how to use chaos and careful propaganda to garner support from their own base and from an international audience.” In Syria, that chaos “opened a foothold for al Qaeda,” said Amos. “They filled a vacuum when Western powers said they would support the opposition rhetorically, but it was Gulf states who did it with cash.”

Amid the chaos in Syria, many news outlets have risen up to compete with the mainstream media, Amos said, but “they don’t always share the same journalistic standards.” There is a problem of “media literacy” that obscures the line between facts and propaganda, she said.

Citizen journalism has been crucial in Syria, Amos said. These activists “filled a void,” especially when mainstream journalists were denied access and visas. Yet with all of the valuable data, information and video that citizen journalists provided, “we are missing the analysis,” she said. For this reason, “there is no substitute for what we do.”