Disinformation narratives emerged across multiple platforms and websites as the Camp Fire and Woolsey Fire made their respective ways across part of California this week. While the mainstream media covered how to help victims, the celebrities who had lost homes, the size of the fires and the causes of the fires, the disinformation themes that spread told another story — one of targeted, strategic burns perpetrated to achieve ulterior motives.

Growth in searches for and social media references to “directed-energy weapons” or DEWs mirror the increase in mainstream coverage of the wildfires. Accounts on Gab and Facebook are currently spreading the idea that weapons using targeted energy mechanisms, such as lasers or microwaves, are being used to deliberately set the California wildfires. The most prominent narrative suggests that DEWs were used to start the wildfires in order to clear land for a high speed bullet train through parts of California.

In the graph below, developed using an analysis on Talkwalker, we see a growth in social media mentions of directed-energy weapons which aligns with the start dates of the California wildfires.

Since the California wildfires began, Google Trends data for searches in the United States has also confirmed audience interest in DEWs and bullet trains. That data shows that US audiences are frequently searching for “high-speed rail – Transit service type” in relation to the wildfires, with Google’s “breakout score” reaching 4,100 percent on Thursday night. When we dug deeper into searches related to high-speed rail in the U.S., we found that “Directed-energy weapon – Topic” has become the first related topic. 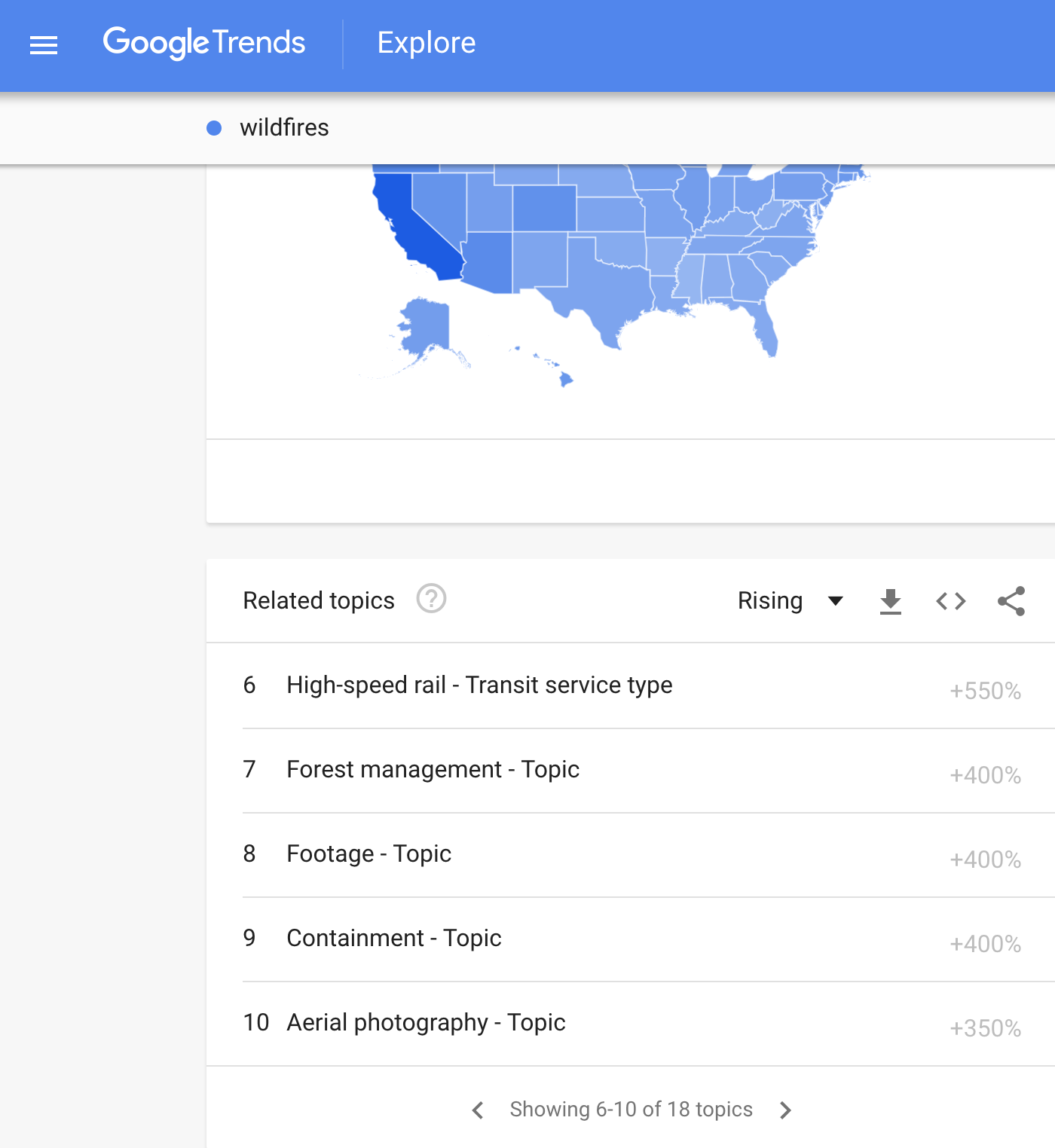 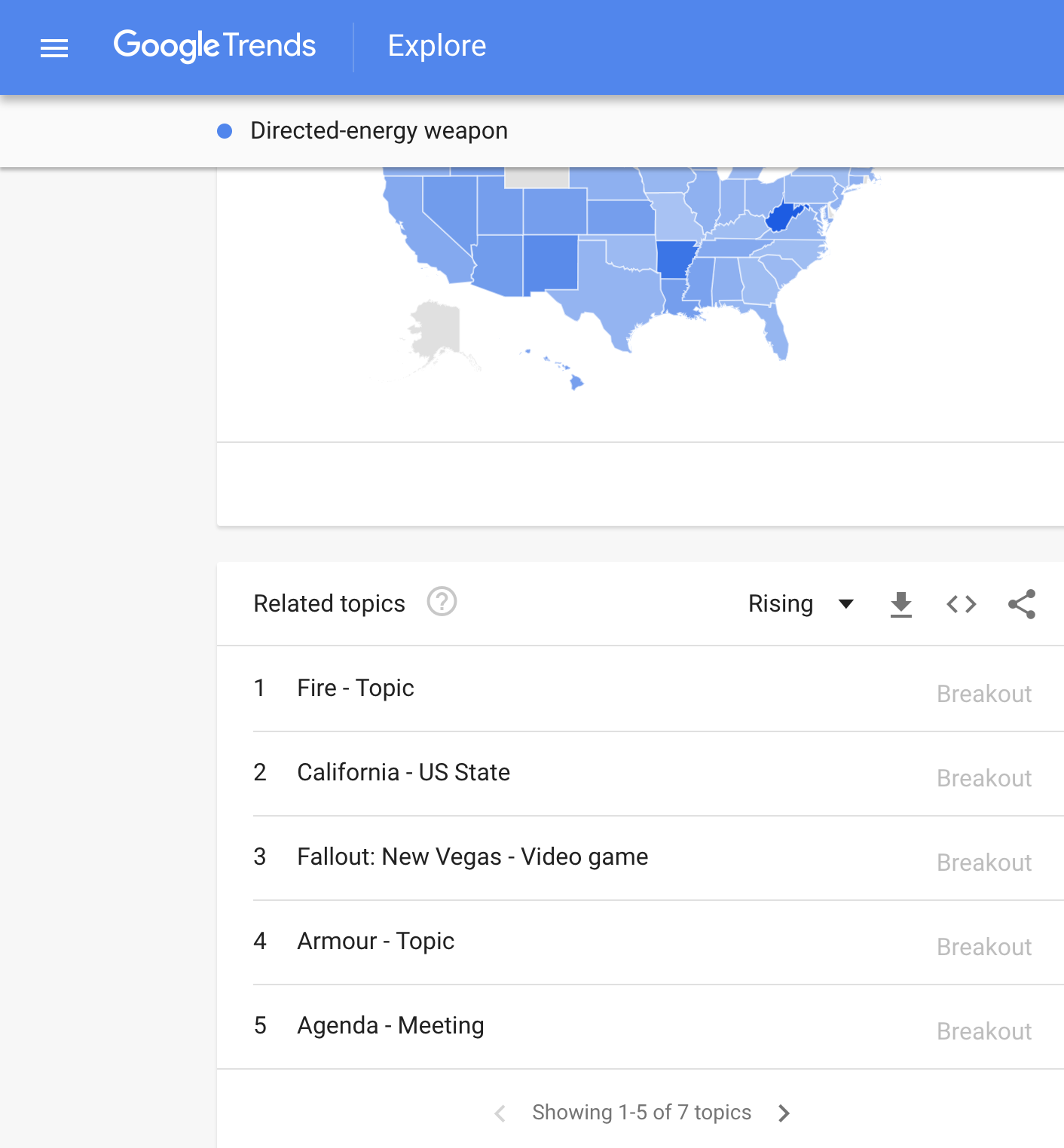 Less prominent related searches included searches for the fact-checking website Snopes.com and the topic “conspiracy theory.” A final search on Google Trends confirms that U.S. audience interest in searching for directed-energy weapons has increased since the Camp and Woolsey wildfires began:

How is this narrative about directed-energy weapons spreading?

The IDLab team mapped one Facebook post, shared on Facebook over 300 times, which claimed that the current wildfires in California were “designed to clear the way for Agenda 21’s expansion of the railroad networks. They already have plans to build the Bullet Train.” The user then claimed that the wildfires were the work of “directed-energy weapons.”

A Gab user, @Shepherd, also falsely linked DEWs to the wildfires in a postclaiming that a laser-like directed-energy weapon “is burning homes in California.” The post includes two images intended to corroborate the claim. However, one image is from a January controlled burn at an oil refinery in Michigan. The other image is from the July 2014 military conflict between Israel and the Gaza Strip.

That photo, taken by Amir Cohen of Reuters, shows an Israeli rocket fired into the Gaza Strip. One of the videos linked to in the Gab post was posted on YouTube on Oct. 18; the other was posted on YouTube on Aug. 1. Both were posted before the current fires began. Since the wildfires began, Shepherd has also created a DEW topic on the platform to aggregate conversations about the conspiracy theory.

However, the DEW narrative is not unique to the current wildfires. During the California wildfires this past summer, the IDLab team tracked other conversations related to DEWs, suggesting that the narrative around this concept has been developing for some time. On Twitter, one user suggested that the U.S. military was setting the summer’s wildfires by using DEWs. As evidence, the user presented pictures of burned homes (but not burned trees), an interstate with burning cars, a light beam in a dark sky, and a U.S. plane with the ability to shoot a laser. While many of these images are related, they were from separate events — for example, a wildfire from 2015, and the same controlled burn in Michigan — and not related to the summer’s wildfires. The tweet referenced QAnon in several places, and Q was mentioned again in the thread when a Twitter user tried to debunk the picture of the controlled burn with a link to a related Snopes article.

Also over the summer, Twitter and Reddit users shared posts that claimed the state of California was deliberately setting the wildfires in order to obtain federal funding; this line of rhetoric also referenced QAnon in several places, a link that is still present in this post on Gab about the current wildfires. 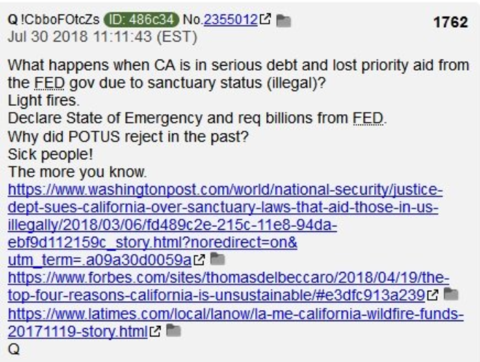 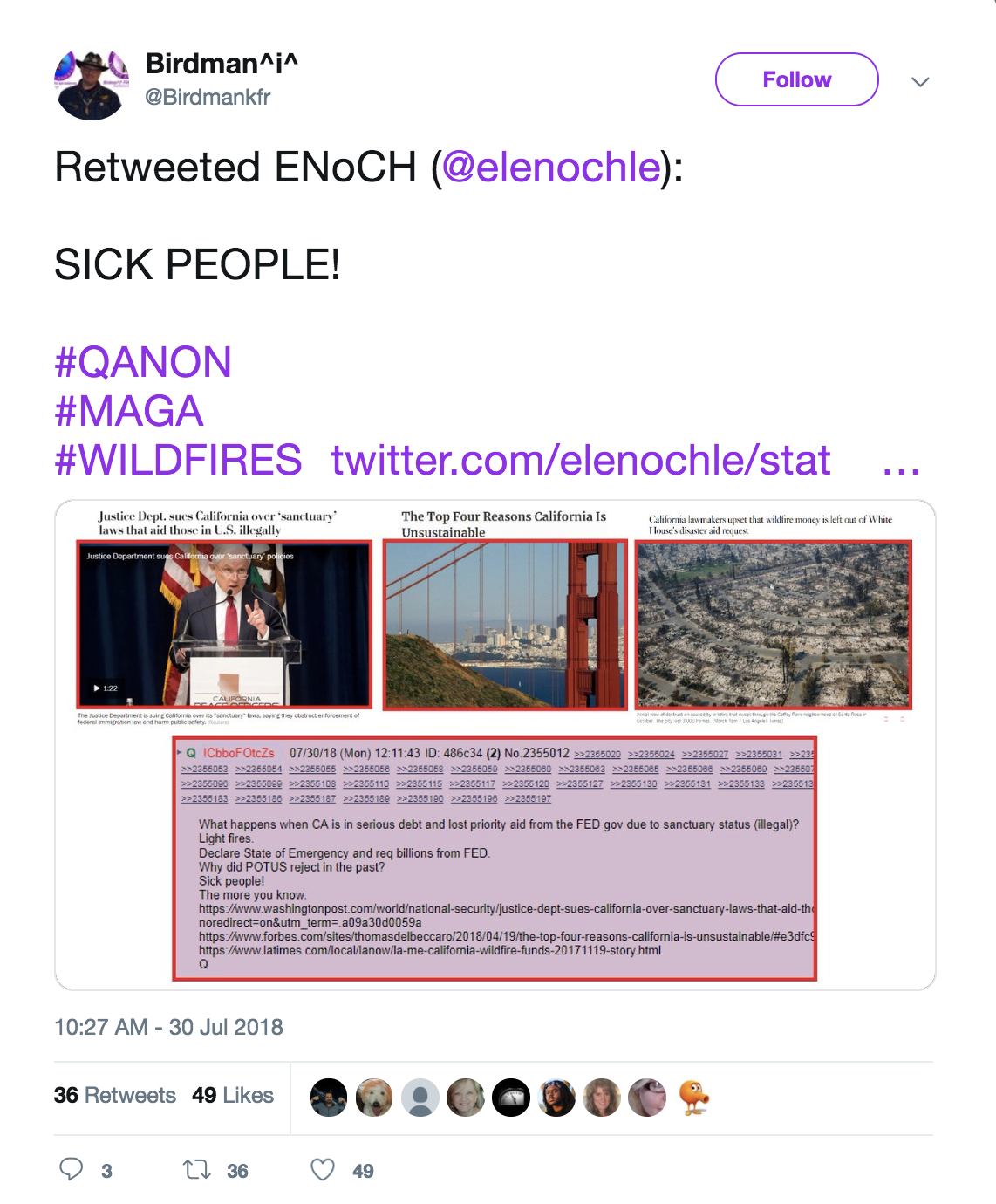 Compared to mainstream coverage of the wildfires, the false posts about the wildfires have garnered much less traction and engagement. However, narratives from the current wildfires, particularly those related to directed-energy weapons and the idea that the fires were deliberately set in order for the state of California to achieve some specific purpose — be it gaining federal funding or clearing land for a high-speed train — have persisted since the fires this summer. This suggests that the beliefs have maintained the interest of online communities. Moreover, the persistence of these narratives suggests that the themes found in the current fires are worth watching, both in relation to the current fires and any future wildfires that may take place.