Tolbert traces digital inequality to lack of skills and money 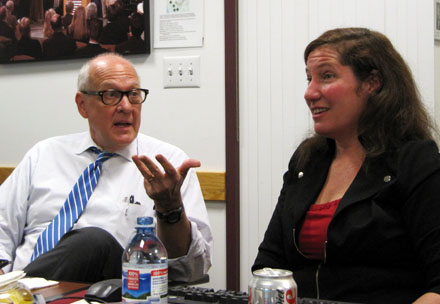 April 5, 2011 — Caroline Tolbert has been researching and tracking digital literacy in the United States. As professor of political science at the University of Iowa, she studies the divide between the availability of Internet access and use of the Internet. Tolbert presented her research at the Shorenstein Center, and revealed the many barriers to digital citizenship in the United States.

Tolbert and her colleagues found that income, gender, race and education level have a significant impact on use of the Internet. While there has been a great deal of attention paid to a lack of broadband penetration in rural areas, Tolbert said poor urban and minority populations are also less likely to have access to high-speed Internet. A lack of technical skills, such as typing and searching for information, prevents users from effectively using the Internet. “The digital divide is not just about hardware and software and wiring and computers,” she argued, “but it’s about the skills necessary to use the technology.”

The importance of Internet access and use is crucial in politics, Tolbert said. Her research found that “individuals who were regularly using online news were more likely to vote and participate in politics in other ways.” She defines “digital citizens” as those who have both high-speed Internet access and the skills to use it every day.

“Just as literacy was critical for participation in society in the 19th century,” she stated, “so digital literacy and access is critical for full participation in the 21st century.” However, Tolbert sees two sides of digital citizenship: “The glass is half full because of the opportunities economically and politically…but half empty because there is incredible inequality.”

← Emily Bell looks outside the field to ‘remake fourth estate’
The Changing Role of the Media: A View from Buckingham Palace and 10 Downing Street →