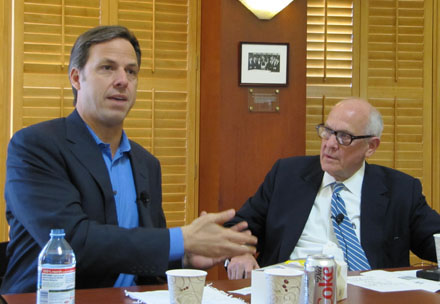 April 17, 2012 – For a behind-the-scenes look at the 2012 presidential race, the Shorenstein Center invited Jake Tapper, Senior White House Correspondent for ABC News and a substitute host for ABC’s This Week, to speak about what the Obama and Romney campaigns need to do to win the election.

Both campaigns, he said, are focused on the 3-6 million “persuadables” that make up the independent vote. While winning over independents “is not an insurmountable task” for Romney, Tapper said, reaching out to the center will be a “balancing act” for both Romney and Obama. Tapper gave an example of Obama being recently criticized for appealing directly to his base instead of reaching out to independents when he made controversial remarks about the Supreme Court.

On the other hand, Romney has a hurdle to overcome regarding women voters; Obama currently leads Romney by about 19% with women voters. Romney “can’t win the election with that chasm,” said Tapper.

What to expect from the Romney campaign, Tapper predicted, is a lot of comparison between what Obama promised in 2008 and what he has delivered as president. As for a running mate, Tapper anticipates that Romney will choose a “conservative, and if she exists, a woman.”

When asked if the repeal of the Affordable Care Act would significantly impair Obama’s chance at reelection, Tapper offered the opposite analysis: that the repeal “would actually be more problematic for Romney,” who brought universal health care to Massachusetts, than for Obama.

← Can the Revolution in Tunisia put North Africa back on the world stage?
HBO in the 21st Century →