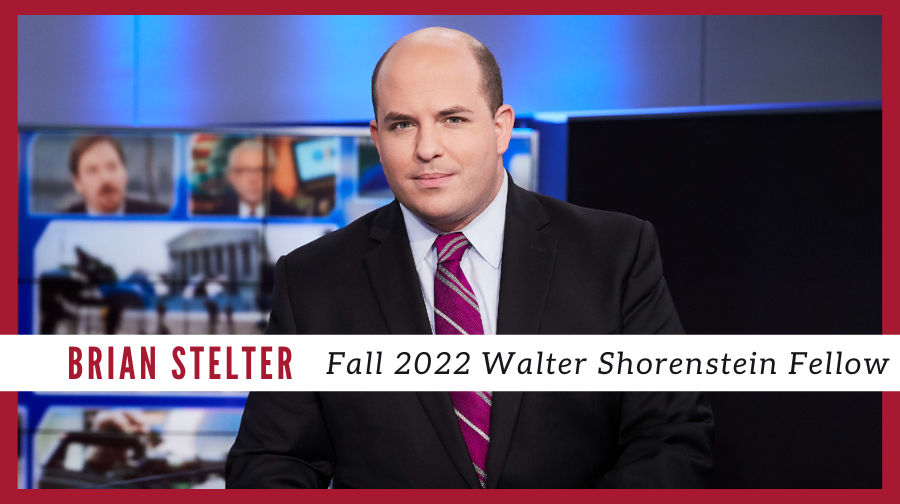 The Shorenstein Center on Media, Politics and Public Policy at Harvard Kennedy School is pleased to announce that Brian Stelter will join the center as the Fall 2022 Walter Shorenstein Media and Democracy Fellow.

The Walter Shorenstein Media and Democracy Fellowship brings high-profile figures at the forefront of media, politics, and public policy to Harvard’s Kennedy School to work with students, faculty, scholars and the public on important issues of the moment. As the Walter Shorenstein Fellow, Stelter will convene a series of discussions about threats to democracy and the range of potential responses from the news media. These discussions with media leaders, policy makers, politicians, and Kennedy School students, fellows, and faculty will help deepen public and scholarly understanding about the current state of the information ecosystem and its impacts on democratic governance.

Brian Stelter is a nationally recognized media reporter and expert on the state of journalism and its wide-reaching implications for society and governance. Until August 2022 he was the anchor of “Reliable Sources,” which examined the week’s top media stories every Sunday on CNN, and the chief media correspondent for CNN Worldwide.

Prior to joining CNN in November 2013, Stelter was a media reporter at The New York Times. He has been a fellow at the Georgetown University Institute of Politics and Public Service and an adjunct professor at New York University’s Arthur L. Carter Journalism Institute. He was named to Forbes Magazine’s “30 Under 30: Media” for three consecutive years, and Fortune Magazine’s “40 Under 40: Media & Entertainment.”

Stelter is the author of the 2020 New York Times best-selling book, HOAX: Donald Trump, Fox News, and the Dangerous Distortion of Truth. In 2013, he published The Times best-seller Top of the Morning: Inside the Cutthroat World of Morning TV. He is a producer on Apple’s drama “The Morning Show,” which is inspired by the book. In 2020 he also executive produced the HBO Documentary, “After Truth: Disinformation and the Cost of Fake News,” directed by Andrew Rossi, who featured Stelter in his 2011 documentary, “Page One: Inside the New York Times.”