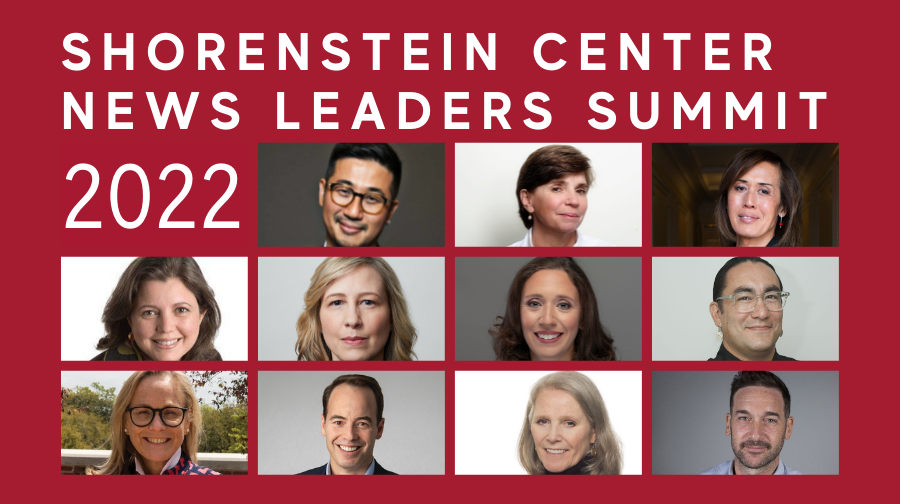 The second cohort of the Shorenstein Center News Leaders Summit will convene this spring to examine ways that newsrooms can address misinformation and media manipulation. The cohort, made up of senior editors and news executives from across the United States, will work with one another, and with Shorenstein Center faculty and staff, including Director Nancy Gibbs, Research Director Dr. Joan Donovan, Dr. Rob Faris, and journalist Emily Dreyfuss, to develop procedures and protocols for handling this great threat to the media ecosystem, and thereby protecting the functioning of democracy. The program is supported by a grant from the John S. and James L. Knight Foundation and a gift from Craig Newmark Philanthropies.

Nancy Gibbs, the Shorenstein Center’s Director and Edward R. Murrow Professor of Practice of the Press and Politics at Harvard Kennedy School, says, “we are thrilled to be building on the success of the first cohort of Shorenstein Center News Leaders. Bringing these groups together to learn, share insights, and develop practices to bring back to their newsrooms, is core to the Shorenstein Center’s mission to support newsrooms in performing their vital role, and managing new challenges they face.”

This new group will join the community of News Leaders begun with the first cohort, as the program works to build connections and collaborative opportunities between senior leaders at major news organizations.

“One of the most rewarding parts of the program is giving newsroom leaders a space to problem solve with their peers across the industry about issues that affect all of us,” said Emily Dreyfuss. “There are very few opportunities for journalists running different organizations to collaborate, but so many of the threats journalists face daily are the same – whether you run a national newspaper, a television station, a newsletter, or a radio show. It is vital we create opportunities to foster debate and consensus among the leaders of our industry.” 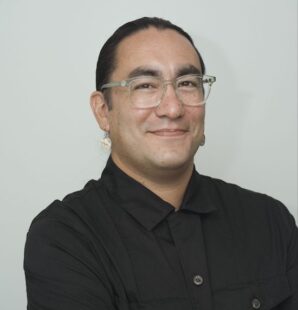 Tristan Ahtone is a member of the Kiowa Tribe and is Editor at Large at Grist. He previously served as Editor in Chief at the Texas Observer and Indigenous Affairs editor at High Country News. He has reported for Al Jazeera America, PBS NewsHour, National Native News, NPR, and National Geographic. Ahtone’s stories have won multiple honors, including investigative awards from the Gannett Foundation and Public Radio News Directors Incorporated. He additionally led the High Country News team that received a George Polk Award, an IRE Award, a Sigma Award, a Society of News Design Award and a National Magazine Award nomination. A past president of the Native American Journalists Association, Ahtone is a 2017 Nieman Fellow and a director of the Muckrock Foundation.

Paul Cheung leads The Center for Public Integrity as CEO to counter the corrosive effects of inequality by using investigative reporting to hold powerful interests accountable and equipping the public with knowledge to drive change. Previously, Cheung worked at the Knight Foundation. He has 20 years of experience in leading digital transformation — pioneering artificial intelligence, VR/AR and digital training initiatives — at such media outlets as NBC News Digital, the Associated Press, Miami Herald, and Wall Street Journal. Cheung serves on the boards of First Draft News, a nonprofit protecting communities from misinformation, and the nonprofit News Leaders Association. Cheung co-leads the Asian American Journalists Association’s executive leadership program in the U.S. and Asia. He is a graduate of the 2016 Punch Sulzberger Executive Leadership program at Columbia University and is an alumnus of New York University.

Gina Chua is Executive Editor at Reuters, where she oversees newsroom operations, including budgets, safety, security, and logistics. She was previously Editor-in-Chief of the South China Morning Post in Hong Kong, and spent 16 years as a foreign correspondent and editor at The Wall Street Journal in Manila, Hanoi, Hong Kong and New York, including eight years running the paper’s Asia edition. She is a native of Singapore, where she started her career in radio and television. Gina has a bachelor of arts in mathematics from the University of Chicago and a masters of science in journalism from Columbia University. Gina transitioned in late 2020, making her one of the most senior openly transgender journalists in the industry.

Christine Glancey is an editor at The Wall Street Journal on the team responsible for guiding and upholding the newsroom’s standards and ethics across platforms and around the globe. Her wide-ranging experience at the Journal spans digital operations and strategy, news and investigative coverage, creating strong editorial teams and managing change with an emphasis on building reader trust. Previous roles include deputy managing editor for news operations and talent, managing editor of the Asian edition and senior news editor at wsj.com. Christine has a bachelor’s degree in journalism from St. John’s University and a master’s in comparative literature from Columbia University.

Tracy Grant is an Associate Editor at The Washington Post. From 2018 to 2022, she served as The Post’s managing editor for staff development and standards. At the time of her promotion, she was the first woman in the history of The Post to achieve the rank of managing editor. Previously, she served as the newsroom’s first Web editor in 1999, as a features editor and as a parenting columnist before becoming a senior Post editor in 2013. Grant is a regular speaker at journalism conferences on issues including the importance of diversity, leadership training and newsroom ethics. Her television appearances have included NBC and PBS. Her move to Associate Editor marks her return to writing. She is a graduate of the Medill School of Journalism at Northwestern University and the mother of grown twin sons.

Kathleen Kingsbury leads the Opinion report for the New York Times, overseeing the editorial board, guest essays, Opinion columnists, letters to the editor, as well as newsletters, audio, video, graphics, design and digital. For the Times, Kingsbury oversaw the paper’s Pulitzer-winning editorials on race and culture in 2019. Before joining the Times in 2017, Kingsbury worked for the Boston Globe, where she edited the 2016 Pulitzer Prize-winning commentary on race and education and won the 2015 Pulitzer Prize for distinguished editorial writing for a series on low wages and the mistreatment of restaurant workers. Kingsbury previously worked for TIME Magazine. After growing up in Portland, Ore., she studied as an undergraduate at Georgetown University’s Walsh School of Foreign Service. She has a graduate degree from the Columbia Journalism School.

Peter Lattman is the managing director of media at Emerson Collective. He oversees Emerson’s investments and grants in media and journalism, which include The Atlantic, where he serves as vice chairman and a member of its board of directors. He also serves on the boards of the Committee to Protect Journalists and Anonymous Content. Prior to joining Emerson, Peter worked as a journalist at The New York Times and The Wall Street Journal. Born in New York City, he grew up in Roslyn, on Long Island. He lives on the Upper West Side of Manhattan with his wife, Isabel Gillies, and their three children.

Judd Legum is the founder and author of Popular Information, an independent newsletter dedicated to accountability journalism. Popular Information won the 2020 Online Journalism Award for Excellence in Newsletters and its reporting was credited by Bloomberg for bringing a “political reckoning” to corporate America. Previously, Legum founded and served as editor-in-chief of ThinkProgress, a progressive media outlet. In 2008, Legum was the research director for Hillary Clinton’s first presidential campaign. He is a graduate of Georgetown University Law Center and Pomona College.

Mirta Ojito is a Senior Director in the NBC News Standards team and works at Telemundo Network in Miami. She is the recipient of an Emmy for the documentary Harvest of Misery/Cosecha de Miseria, and of a shared Pulitzer for national reporting in 2001 for a series of articles about race in America in The New York Times. She began her career in 1987 and has worked at The Miami Herald, El Nuevo Herald, and The New York Times. Ojito, a former assistant professor in the Graduate School of Journalism at Columbia University, is the author of two works of non-fiction, Finding Mañana: A Memoir of a Cuban Exodus, and Hunting Season: Immigration and Murder in an All-American Town. Her work has been included in multiple anthologies, including Written into History: Pulitzer Prize Reporting of the Twentieth Century, by Anthony Lewis.

Julie Pace is senior vice president and executive editor of The Associated Press, where she directs global news operations and news content in all formats from journalists based in 250 locations in 100 countries. Pace joined AP in 2007. She was previously Washington bureau chief, where she led multiformat coverage of U.S. politics and elections, national security, and domestic policy. She pushed for press freedom and access and oversaw efforts to bolster AP’s fact-checking operation. Pace began her reporting career at South Africa’s first independent TV network and as a freelancer in southern Africa before joining The Tampa (Fla.) Tribune as a general assignment reporter in 2005. A native of Buffalo, New York, Pace holds a bachelor’s degree in journalism from Northwestern University.

Kerry Smith is the senior vice president of editorial for ABC News. She is responsible for the editorial standards for ABC News programs, platforms; and ABC News Studios, and serves as the senior advisor to the news division with oversight on all editorial partnerships. Formerly, Smith was senior Washington editor for ABC News and has worked for “World News Tonight,” “Good Morning America,” and “20/20,” among other programs. A former investigative producer, Smith has produced documentaries, news programing and special events broadcasts for ABC News. Her work has been honored with Peabody, DuPont and Emmy awards for long-form journalism and breaking news coverage. Smith serves on several boards, including at The International Women’s Media Foundation; ProPublica and TheGroundTruth Project, and is a member of the leadership council on The Committee to Protect Journalists. She was a 2015 Sulzberger Fellow at the Graduate School of Journalism, Columbia University.