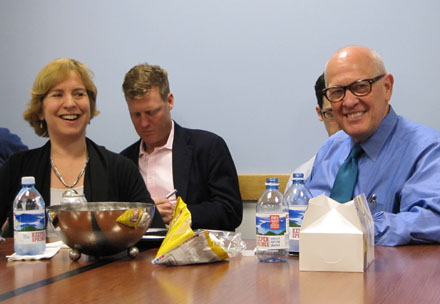 April 20, 2011 — Vivian Schiller, former CEO and president of National Public Radio, spoke to the Shorenstein Center about how public and commercial news organizations can learn from each other to be successful and relevant in the future.

As veteran of both for-profit and non-profit media, and currently “on the sidelines,” Schiller offered advice to both media platforms. Using the form of an open letter, she began: “Dear public broadcasting,” and outlined four ways it could learn from commercial media. First, she advised public broadcasting to “see yourselves in the context of the wider world of media” and “embrace the fact that you are now competing in the big leagues, and are no longer the scrappy underdog.” She urged it to recognize that “there is massive change on the horizon” — with Internet radio, “the monopoly advantage of the radio tower will begin to fade.” “Begin to prepare for that now,” she advised.

Secondly, she acknowledged that commercial media better understands that “competition is good” because it leads to “innovation and risk taking.” “The desire to win is a great motivator to change,” she noted. Third, “planning and research should be your best friend.” With the threat of federal funding cuts, she warned, planning is even more important. Finally, she stated that “your continued existence is not guaranteed,” and a “public service shouldn’t be confused with public mandate.” There is “no such thing as lasting media loyalty.” To remain relevant, she said, “keep your eyes on the prize: the delivery of your distinctive public service content and your relationships with listeners in your community.”

Turning her focus to commercial media, Schiller said that she is “optimistic about your role in journalism,” but pointed out ways that it could learn from the public sphere. First, it should recognize that “public service is a commercially viable business option.” Her experience has shown her that “there is a hunger for high quality information” from trustworthy organizations, and the audience is “larger than you may think.” She urged commercial media to “grasp the opportunity in local.” Ignoring local communities, she said, means “missing the single biggest uncharted territory in marketing today.” That public radio “gets the power of a national/local partnership” is key to its success, she argued.

Schiller further pointed out that public media will “give ideas time to succeed or at least time to fail in a way that there is something to be learned,” and commercial media should do the same. Finally, she urged for-profit media to “embrace your audience, not as customers, but as partners.” Membership is powerful because “it is not just about revenue…the beauty of membership is the loyalty that it generates, the connection,” she said.

When asked by Alex S. Jones, Shorenstein Center director, to speculate on what would happen if NPR lost federal funding, Schiller responded that rural and poorer areas that are “underserved” would be hardest hit. Since only 10 percent of the Corporation for Public Broadcasting‘s budget goes to public radio, she said, stations that are unable to raise their own funds rely most heavily on federal funding, and so would crumble if that funding were no longer available. Charlie Kravetz, general manager of WBUR, Boston’s NPR station, attended the discussion and agreed that he “feels fairly confident that if they lost that money they could make it up with donations,” but recognized that the station’s large budget is not typical.

← Morgenson: With Dodd-Frank, next crisis will come sooner, not later
Partners of Necessity: The Case for Collaboration in Local Investigative Reporting →