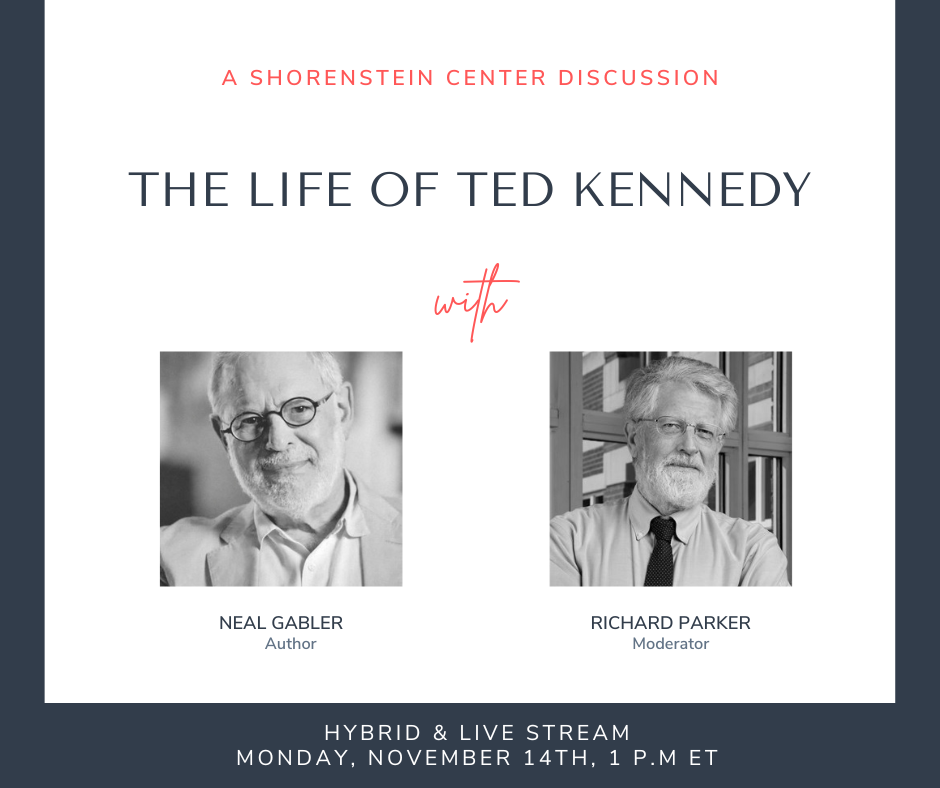 A Shorenstein Center Discussion with Neal Gabler and Richard Parker

Neal Gabler is the author of five books: An Empire of Their Own: How the Jews Invented Hollywood; Winchell: Gossip, Power and the Culture of Celebrity; Life: the Movie: How Entertainment Conquered Reality; Walt Disney: The Triumph of the American Imagination; and, most recently, Barbra Streisand: Redefining Beauty, Femininity, and Power for the Yale Jewish Lives series. His essays and articles have appeared in numerous newspapers and magazines, including The Atlantic, Vanity Fair, Esquire, Playboy, Newsweek, and Vogue, and he has been the recipient of two Los Angeles Times Book Prizes, Time magazine’s nonfiction book of the year, USA Today‘s biography of the year, a National Book Critics Circle nomination, a Guggenheim Fellowship, a Public Policy Scholarship at the Woodrow Wilson Center, a Shorenstein Fellowship at the Harvard Kennedy School, and a Patrick Henry Fellowship at Washington College’s CV Starr Center. He has also served as the chief nonfiction judge of the National Book Awards. Gabler is currently a professor for the MFA program at Stonybrook Southampton.

Richard Parker was a long-time Lecturer in Public Policy and Senior Fellow of the Shorenstein Center at Harvard Kennedy University. An economist by training, he is a graduate of Dartmouth College and Oxford University. He has worked as an economist for the UNDP, as co-founder of Mother Jones Magazine, and as head of his own consulting firm, serving congressional clients, including Senators Kennedy, Glenn, Cranston, and McGovern, among others. Parker has held Marshall, Rockefeller, Danforth, Goldsmith, and Bank of America Fellowships. His books include: The Myth of the Middle Class, a study of U.S. income distribution; Mixed Signals: The Future of Global Television News; and the intellectual biography, John Kenneth Galbraith: His Life, His Politics, His Economics. His articles have appeared in numerous academic anthologies and journals and in the New York Times, Washington Post, Los Angeles Times, New Republic, Nation, Harper’s, Le Monde, Atlantic Monthly, and International Economy, among others.

This event will be live streamed. It is a HYBRID event, with the option to attend IN-PERSON or ONLINE: