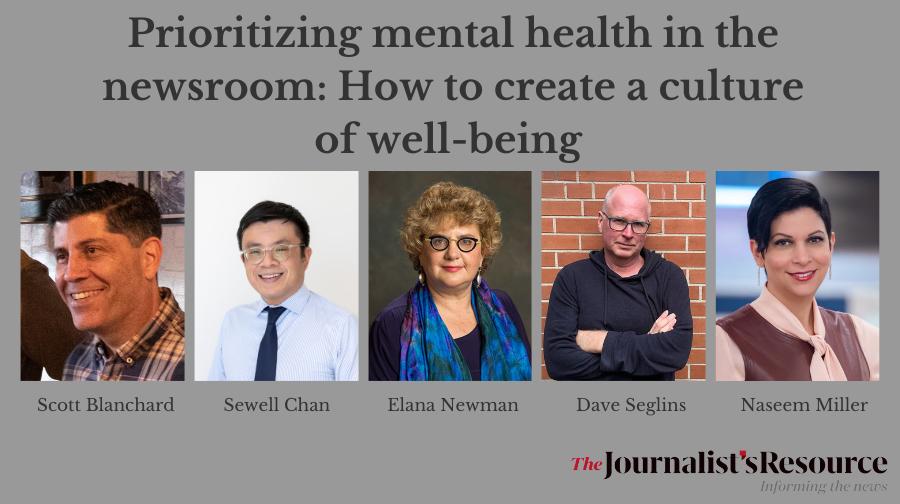 Prioritizing mental health in the newsroom: How to create a culture of well-being

January 17, 2023
12:00 P.M. ET
Virtual Webinar
Register
The Journalist’s Resource is a project of the Shorenstein Center aimed at bridging the gap between journalism and academia. Its primary goal is helping journalists improve their work by relying more often on scientific evidence and high-quality, peer-reviewed research.

Today’s journalists are under a tremendous amount of stress. The news cycle is incessant, and reporters and editors are routinely exposed to trauma. The news industry, especially local news, faces an uncertain future. And online harassment of journalists, especially women and journalists of color, is a huge and growing problem. Studies have found that journalists’ work can impact their mental health. Research suggests that between 80 to 100% of journalists have been exposed to a traumatic event on the job, according to the Dart Center for Journalism & Trauma. Last year, the results of a survey of more than 1,200 Canadian journalists confirmed that they face an “alarming amount of stress,” and many suffer harm as a result of repeatedly covering traumatic stories, yet, “those harms are often not met with appropriate support.”

There are practical steps that newsrooms can take to protect their journalists’ mental health. In this session, four experts drew from their personal and professional experiences to share advice on how newsrooms can make mental well-being a part of their culture. Experts included public media station WITF Director of Journalism Scott Blanchard, Texas Tribune Editor-In-Chief Sewell Chan, Research Director at Dart Center for Journalism & Trauma and McFarlin Professor of Psychology at the University of Tulsa Elana Newman, and Dave Seglins, an investigative journalist and well-being champion at CBC News. The webinar was moderated by Naseem Miller, senior health editor at The Journalist’s Resource.

In this one-hour webinar you’ll learn:
– How to create trauma-aware newsrooms.
– How different types of newsrooms can create a culture of well-being.
– How to care for reporters and editors before, during and after difficult stories.
– How Canadian journalists are leading the way to bring mental health into newsrooms.

Naseem Miller joined The Journalist’s Resource in 2021 after working as a health reporter in local newspapers and national medical trade publications for nearly two decades. Before joining JR, she was a senior health reporter at the Orlando Sentinel, where she covered the Pulse nightclub mass shooting and was part of the team that was a 2016 Pulitzer Prize finalist for its coverage of the tragedy. In 2017, she co-started the Journalists Covering Trauma Facebook group as a gathering place for reporters and editors and an information resource about journalists’ mental health and responsible reporting of tragedies. She’s passionate about helping journalists and exploring the intersection of journalism and trauma.

Scott Blanchard is the director of journalism at public media station WITF in Harrisburg, Pa. He’s a board member for the Trust for Trauma Journalism and was a 2013 Ochberg Fellow at the Dart Center for Journalism & Trauma. Blanchard led a team that created a trauma awareness/peer-support program in Digital First Media in 2014, the first time a U.S.-based local news organization undertook such an effort. He has also helped coordinate and/or led trauma awareness and peer support training in several newsrooms. He is a past president of the Pennsylvania Society of News Editors.

Sewell Chan joined The Texas Tribune as editor in chief in October 2021. Previously he was a deputy managing editor and then the editorial page editor at the Los Angeles Times, where he oversaw coverage that was awarded a Pulitzer Prize for editorial writing in 2021. Throughout his  22-year career, first as a reporter and later as an editor, Chan has covered several mass tragedies, including the 9/11 attacks. Most recently, he led The Texas Tribune newsroom in covering the mass shooting at Robb Elementary School in Uvalde. Chan serves on the boards of Columbia Journalism Review, Freedom House, Harvard Magazine and News Leaders Association. He is a member of PEN America, the Council on Foreign Relations and numerous journalism organizations. He was elected to the board of the Pulitzer Prizes in 2022.

Elana Newman, Ph.D., is McFarlin Professor of Psychology at The University of Tulsa, Research Director of the Dart Center for Journalism and Trauma, and Co-Director of The University of Tulsa Institute of Trauma, Adversity, and Injustice. She is a journalist ally & PTSD expert. Her current research examines the occupational health of journalists who cover trauma, and the effects of journalistic practices upon consumers and sources. She provides training and consultations to journalists about trauma science, interviewing survivors, source development, self-care, resilience, and trauma-related newsroom practices. She is a Past President of the International Society of Traumatic Stress Studies. Newman has overseen the development of a bibliographic database about journalism and trauma to aid teachers and scholars identifying information about trauma and journalism (see www.dartcenter.org).

Dave Seglins is an investigative journalist and “Well-being Champion” with CBC News based in Toronto. He is a leading educator and advocate within the news industry and is co-author of a national study of more than 1,200 Canadian journalists (“Taking Care: a report on mental health, well-being and trauma among Canadian media workers”, May 2022). He is a fellow of the Dart Center for Journalism & Trauma and holds certificates in Global Mental Health from Harvard Medical School and Mental Health First Aid from the Mental Health Commission of Canada.