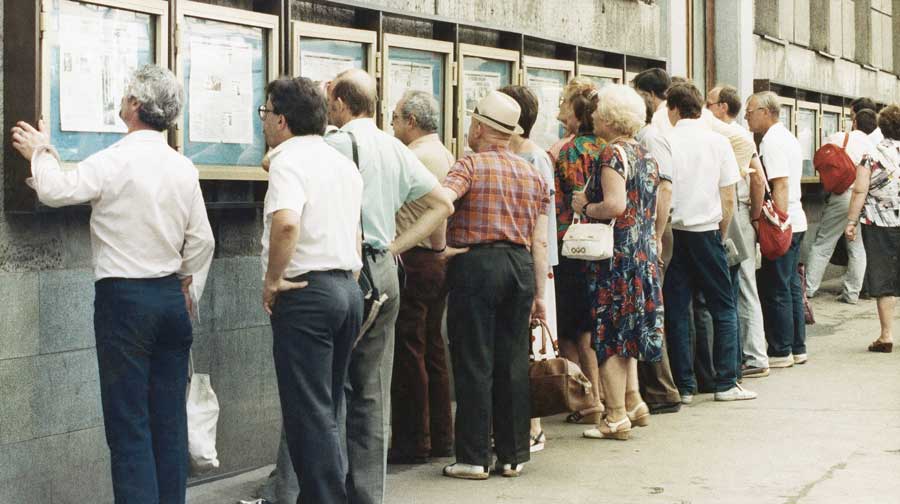 The Post-Soviet Press: A Long Road to Freedom

December 7, 2021
This event has passed.
Watch a discussion with people at the forefront of the struggle in Ukraine and Moldova, two countries where western support remains crucial for independent media and investigative journalism.

Thirty years ago this December, the Soviet Union broke up, creating 15 new countries and high expectations that many of them would embrace democracy — including guarantees of freedom of the press. Thirty years on, only a handful of the post-Soviet states have met expectations for free, independent media. Several others maintain strict, Soviet-style controls on information, and press freedoms continue to decline in Russia, Belarus and elsewhere. But the struggle goes on, aided by western support. We’ll talk with people at the forefront of the struggle in Ukraine and Moldova, two countries where western support remains crucial for independent media and investigative journalism.

Corina Cepoi brings more than 25 years of experience as a media, civil society, and communications expert. She currently manages Internews office in Moldova supervising the USAID and UKaid funded project MEDIA-M, and US Embassy, OSF, Sweden and the Netherlands supported projects aiming to develop media outlets and CSOs in Moldova, expand media literacy activities and improve media laws in the country. She has previously managed several major projects concurrently for Internews in Kyrgyzstan as Country Director. Before serving as Country Director, Ms. Cepoi served for two years as Project Director for an earlier iteration of the USAID public broadcaster support project that reformed the Kyrgyz national public broadcaster, OTRK. In 2002 Ms. Cepoi founded the Chisinau School of Advanced Journalism at the Independent Journalism Centre (IJC) Moldova and served as IJC director for 12 years, overseeing a variety of projects focused on training Moldovan journalists to conduct rigorous, objective, and ethical reporting. Over the years, Ms. Cepoi has consulted and trained for numerous organizations and donors, including the World Bank, USAID, UNDP, NDI, Transparency International, EU, and UNESCO, providing technical assistance on media management and communications strategies, training of journalists, press reports, civil society expertise, evaluations and surveys. She speaks fluent English, Russian, and French in addition to her native Romanian.

Oleg Khomenok is a member of Global Investigative Journalism Network (GIJN) Board of Directors, International Fact-Checking Network expert, and a Senior Media Advisor at Internews Network. On March 2020 he was elected as a member of the Ukrainian Commission on Journalism Ethics. Khomenok has over 25 years of experience in journalism, media education and managing investigative reporting and media support projects in the post-Soviet media environment. He has been involved in establishing and managing SCOOP projects of investigative reporting support in Ukraine, Russia and Belarus since 2003 through 2017. Over the past decade Khomenok has conducted dozens of journalism training sessions in investigative journalism techniques and strategies for investigative reporters in Ukraine, Russia, Belarus, Moldova and other countries of the Caucasus and Central Asia. As coordinator of the award-winning YanukovychLeaks.org, Khomenok worked with a team of Ukrainian reporters who collected tens of thousands of financial documents from the former Ukrainian president, rescuing and publishing them online.

Ann Cooper has more than 25 years of radio and print reporting experience. She also worked as executive director of the Committee to Protect Journalists prior to joining the Columbia Journalism School faculty, where she retired in 2019 as CBS Professor Emerita of Professional Practice. Cooper’s voice was well known to National Public Radio listeners as NPR’s first Moscow bureau chief, covering the tumultuous events of the final five years of Soviet communism. She has continued to write about the glasnost era, the subsequent decline of press freedom in Russia, and Russia’s global media strategy. Cooper worked as NPR’s bureau chief in Johannesburg 1992-1995, where her coverage of South Africa’s first all-race elections helped NPR win a duPont-Columbia silver baton for excellence in broadcast journalism. Iowa State University, where Cooper majored in journalism, has honored her with its James W. Schwartz award for service to journalism and its Alumni Merit Award, given “for outstanding contributions to human welfare that transcend purely professional accomplishments and bring honor to the university.” Cooper was a Spring 2020 Joan Shorenstein Fellow, and published the paper Conveying Truth: Independent Media in Putin’s Russia.