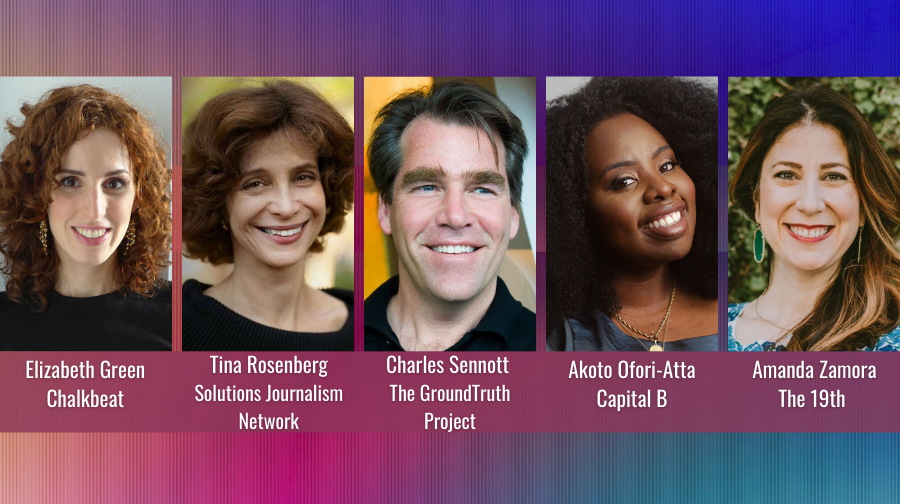 April 12, 2022
This event has passed.
Virtual Webinar
Register
This event is part of the News Innovation Series, which is supported by a gift from Elaine Schuster.

At a time of growing concern about the spread of disinformation and the collapse of the traditional business model for journalism news, meet journalists who are responding to the challenges with innovative and robust nonprofit news organizations. Join us as we meet and learn from five founders who executed on their vision to fill critical gaps in coverage and challenge traditional approaches to reporting.

Jennifer Preston is senior fellow at the Shorenstein Center’s Technology and Social Change Project. Before joining the center as a fellow last year, Jennifer spent more than six years as vice president for journalism at the John S. and James L. Knight Program, where she oversaw a portfolio with more than $200 million in investments for journalism, media innovation and the First Amendment. Prior to joining Knight, Jennifer spent almost 20 years at The New York Times as a senior editor, reporter and the newsroom’s first social media editor. @JenniferPreston

Elizabeth Green is the CEO and co-founder of Chalkbeat, the nonprofit news organization dedicated to improving educational equity through local, independent, high-impact journalism. Since launching in 2014, Chalkbeat’s reporting has spurred changes in education funding, legislation, policy, and practice and is regularly cited or republished in dozens of publications, including The New York Times, the Wall Street Journal, the Atlantic, Vox, and more. Elizabeth also co-founded the American Journalism Project, the first venture philanthropy firm dedicated to local news. Her book, Building a Better Teacher, was a New York Times bestseller and notable book of 2014. @elizwgreen

Tina Rosenberg is co-founder and vice president of innovation at the Solutions Journalism Network, which helps journalists inform their communities about potential solutions to local and global challenges. Since 2013, the Solutions Journalism team has worked with more than 500 news organizations and 20,000 journalists around the world. They deliver training on story selection, interviewing techniques, covering communities of color that have been long misrepresented and excluded in mainstream media, along with leading collaborative reporting efforts. With co-founder David Bornstein, Rosenberg wrote The Fixes column in the New York Times Opinon section about solutions to social problems for 11 years. Rosenberg is also the author of three books, including The Haunted Land: Facing Europe’s Ghosts After Communism in 1995, which won the Pulitzer Prize for General Non-Fiction and the National Book Award for Nonfiction. @tirosenberg

Charles Sennott is founder and editor-in-chief of The GroundTruth Project, an international award-winning, non-profit media organization that supports emerging journalists to report on stories in under-covered parts of the world, including the United States. A former international correspondent for The Boston Globe and co-founder of The Global Post, Sennott launched GroundTruth six years ago. Since then, fellowships have been awarded to more than 300 emerging journalists from 50 countries. In 2017, the flagship program, Report for America, was established. Working across 46 states, Report for America now has 225 reporters covering under-covered beats and communities in 160 newsrooms. @cmsennott

Akoto Ofori-Atta is Cofounder and Chief Audience Officer of Capital B, a new nonprofit media company that centers Black voices, audience needs and experiences. She was previously Managing Editor at The Trace, where she was responsible for partnerships, special projects, and editorial operations. As a founding editor, Akoto helped secure more than 170 local and national editorial partners for The Trace’s features and investigations. She’s also held the positions of Associate Editor and Social Media Manager at The Root and Senior Editor at Essence Magazine. In 2015, she completed a John S. Knight Journalism Fellowship at Stanford University, where she focused on issues surrounding diversity and the Black press. She was selected as a 2019-2020 Emerging Leader for the Institute of Nonprofit News, and she’s currently a fellow at the Sulzberger Executive Leadership Program at Columbia University’s School of Journalism. @akoto_oa

Amanda Zamora is co-founder and publisher of the 19th, an independent, nonprofit newsroom reporting at the intersection of gender, politics, and policy. With strong original reporting, events and community engagement, the 19th launched in January 2020 and seeks to give women, people of color and the LGBTQ+ community the journalism and community they need to be equal participants in our democracy. A pioneer in helping journalists understand how to use social media to inform reporting and build community, Zamora spent two decades as a digital editor, product manager and audience strategist at the Texas Tribune, ProPublica and The Washington Post. She is also a member of the Aspen Institute’s Commission on Information Disorder. @amzam