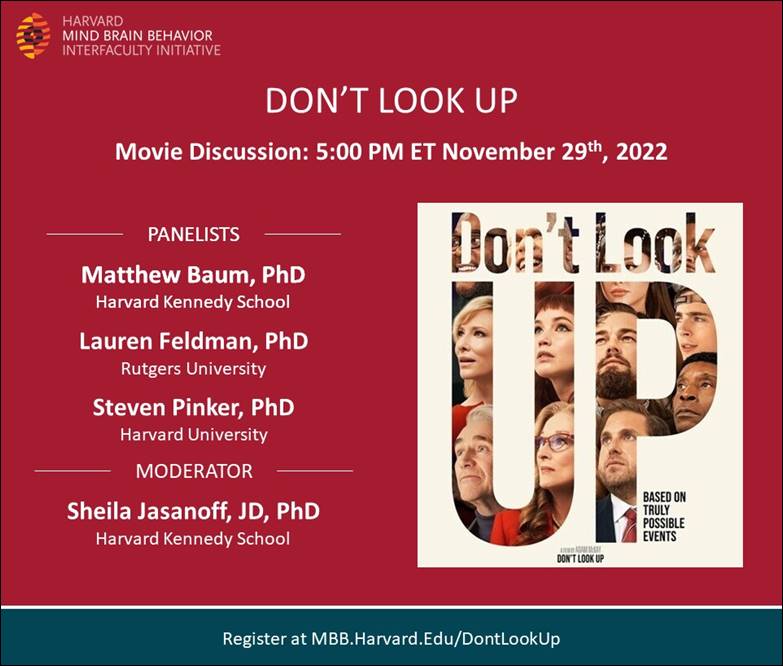 November 29, 2022
5:00 p.m. ET
Online
Register
The Mind/Brain/Behavior Interfaculty Initiative (MBB) is an interdisciplinary community of investigators whose research aims to elucidate the structure, function, evolution, development, and pathology of the nervous system in relation to human behavior and mental life. The MBB community draws broadly from all the schools of the University to bring together scholars - from undergraduates to faculty - with a common commitment both to empirical research and to multidisciplinary dialogue.

Don’t Look Up follows two astronomers as they discover a comet headed directly toward Earth and attempt to warn humanity of the impending danger. Join our panel of authors and scholars in science and technology, communication and media, government, and psychology as they discuss the film and its messages, including the politicization of science, the consequences of misinformation, and the roles of humor and the arts in exploring these issues. The event is being sponsored by the Mind Brain Behavior Interfaculty Initiative. MBB is a university-wide effort to probe interfaces and relationships between neurobiological descriptions and explanations of mind and behavior and those that come from other disciplines.

Matthew Baum, PhD, Marvin Kalb Professor of Global Communications and Professor of Public Policy at Harvard, studies the effects of domestic politics on international conflict and cooperation as well as the role of the mass media and public opinion in contemporary American politics.

Steven Pinker, PhD, Johnstone Family Professor of Psychology at Harvard, researches topics in language, cognition, and social relations. His two most recent books explored the nature of reason and how it has contributed to human progress.

Sheila Jasanoff, JD, PhD, Pforzheimer Professor of Science and Technology Studies at Harvard, explores the role of science and technology in the law, politics, and policy of modern democracies. Her research has included the role of science in environmental decision making, and the expectations that publics in diverse countries holds regarding the uses of expertise in policy.