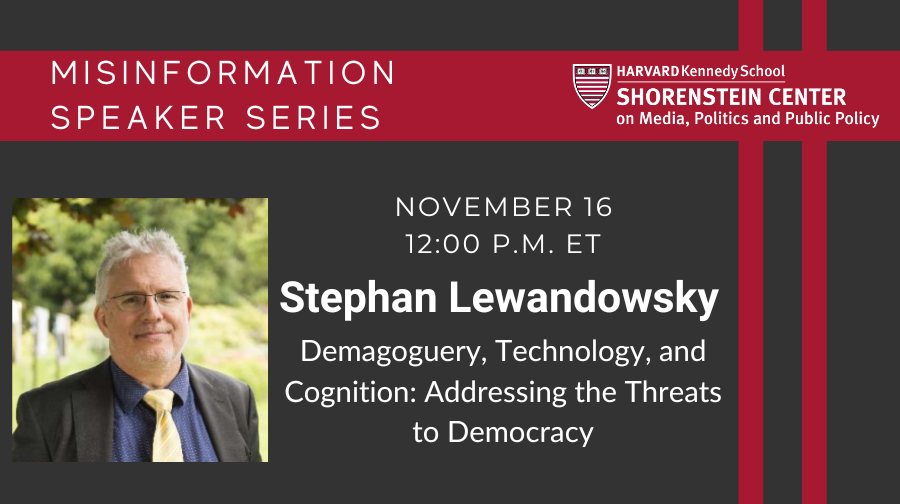 Demagoguery, Technology, and Cognition: Addressing the Threats to Democracy

November 16, 2022
This event has passed.
This event is part of the Speaker Series on Misinformation, co-sponsored by the Shorenstein Center for Media, Politics and Public Policy at Harvard's Kennedy School and the NULab at Northeastern University.

Democracy is in retreat or under pressure worldwide. Even in countries with strong democracies, polarization is increasing, and the public sphere is awash in misinformation and conspiracy theories. Many commentators have blamed social media and the lack of platform governance for these unfortunate trends, whereas others have celebrated the Internet as a tool for liberation, with each opinion being buttressed by supporting evidence. One way to resolve this paradox is by identifying some of the pressure points that arise between the architecture of human cognition and the online information landscape, and how these pressure points can be used by populist demagogues to undermine democracy. Professor Stephan Lewandowsky surveyed some of those pressure points, focusing on the attention economy and the algorithms that curate our news feeds, and will show how they allow politicians to replace evidence-based discourse with often emotive belief-speaking that is less sensitive to evidence and accountability. Stephen will also discuss a spectrum of possible solutions.

Professor Stephan Lewandowsky, FAcSS, FAPS, is a cognitive scientist and Chair at the University of Bristol and the recipient of numerous awards and honours, including a Discovery Outstanding Researcher Award from the Australian Research Council, a Wolfson Research Merit Fellowship from the Royal Society, and a Humboldt Research Award from the Humboldt Foundation in Germany. He is a Fellow of the Academy of Social Science (UK) and a Fellow of the Association of Psychological Science. He was appointed a fellow of the Committee for Skeptical Inquiry for his commitment to science, rational inquiry and public education. He also holds a Guest Professorship at the University of Potsdam in Germany.