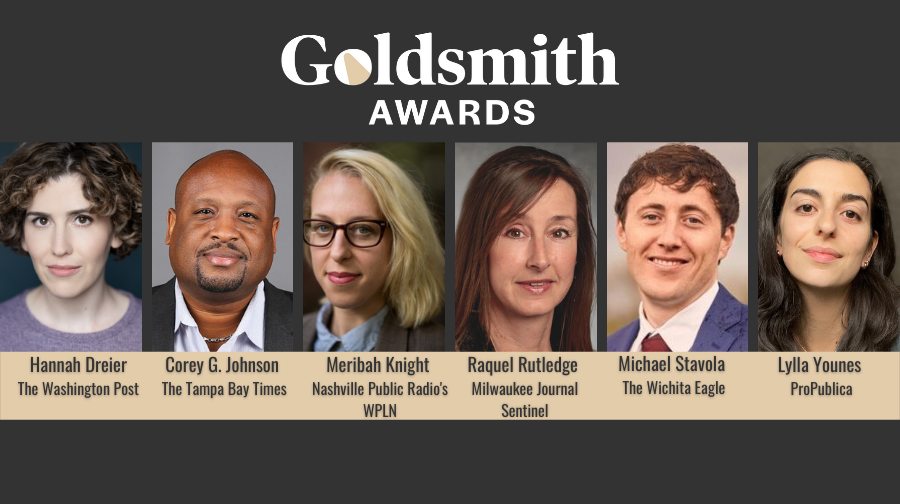 The finalists for the 2022 Goldsmith Prize for Investigative Reporting joined Shorenstein Center Director Nancy Gibbs for a discussion on the craft and impact of their work, and the importance of investigative journalism in a free society.

Visit GoldsmithAwards.org to learn more about this year’s finalists, and to browse the archives from the past three decades of the Goldsmith Awards.

Hannah Dreier is a national enterprise reporter at The Washington Post. She won the 2019 Pulitzer Prize in feature writing for stories about the gang MS-13. Dreier has written about immigration policy, federal disaster aid and police reform at The Post. She previously covered immigration for ProPublica and was a Venezuela correspondent for the Associated Press.

Corey Johnson is a reporter on the investigative unit at the Tampa Bay Times. While working at the Center for Investigative Reporting, he uncovered systemic weaknesses in earthquake protections at thousands of California public schools. That work was a finalist for the Pulitzer Prize and won the prestigious Gold Medal from the Investigative Reporters and Editors, the Scripps Howard Award for Public Service, and the Gannett Foundation Award for Innovation in Watchdog Journalism.

Meribah Knight is the reporter and host of the Peabody award-winning podcast, The Promise, an immersive series from Nashville Public Radio about inequality and the people trying to rise above it. She is currently a fellow in ProPublica’s Local Reporting Network. Her writing has appeared in The New York Times, The New Yorker, O, The Oprah Magazine and The Chicago Reader. Her radio and multimedia work has been featured on NPR, Marketplace, Here and Now, WBEZ, The PBS NewsHour and Chicago Public Television.

Raquel Rutledge is a public service investigative reporter at the Milwaukee Journal Sentinel who has received the nation’s highest honors in journalism, including the Pulitzer Prize for Local Reporting. Her investigations have not only informed the public but also led to reforms — saving taxpayers millions of dollars by ending rampant fraud in state child care funding; forcing the U.S. State Department and TripAdvisor to acknowledge widespread reports of unsafe alcohol and assaults at high-end resorts in Mexico; ending unsafe practices that allowed deadly contamination of antiseptic wipes to be used in hospitals; and more.

Michael Stavola covers breaking news at The Wichita Eagle. He’s won a national and several state awards during his six years of working at newspapers in Kansas. He finished his MBA at Wichita State University in spring 2020.

Lylla Younes is a reporter and developer on ProPublica’s New Apps team. Her work mapping cancer-causing industrial pollution in Louisiana helped lead to the suspension of Formosa Plastic’s permit in St. James Parish, and won the 2020 Nina Mason Pulliam Award for Outstanding Environmental Reporting. In 2020, she was part of a team that wrote a peer-reviewed paper linking COVID deaths to air pollution. She has also collaborated with the Oregonian and OPB on a series about how Oregon’s timber industry hollows rural communities. The series won the 2021 John B. Oakes Award for Distinguished Environmental Journalism.