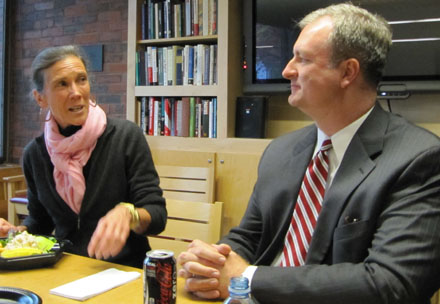 October 26, 2011 — “Debates matter,” said Institute of Politics Director Trey Grayson, in introducing Janet Brown, executive director of the Commission on Presidential Debates, at an event co-sponsored by the Shorenstein Center and the IOP. Grayson cited the example of Texas Governor Rick Perry whose poll ratings have dropped after appearances in GOP presidential primary debates.

Brown acknowledged the importance of debates, and said that exit poll data has shown that debates have a significant impact on voting. She went on to explain the role of the Commission on Debates: to produce the presidential and vice-presidential debates during the general election season, provide educational initiatives, and most recently, Brown said, “the commission works with emerging democracies abroad.” Started in 1987, the commission is a nonprofit, nonpartisan organization that receives no federal funding.

In producing the televised debates, the commission chooses the venues, moderators and formats; raises money to produce the debates, and works with the Secret Service and the campaigns. The debate is the “only event when major candidates are in one place,” Brown said, and noted that with anywhere from 36 to 80 million viewers, “even a bad debate audience blows most other television audiences away.”

In choosing a moderator, Brown said that the commission looks for three qualifications: Moderators must have covered the campaign and be familiar with the major issues, must have expertise with live TV, and “must understand that they are not on the ballot, that their job is to elicit information from the candidates.” Since neutrality is critical, the commission does not look for moderators with a “specialized point of view,” Brown said. “If the moderator becomes a player, it changes the dynamic, and the public does not find that helpful or appropriate,” she added.

With the emergence of new technology, Brown observed that people are eager to share their own opinions, but are “out of the habit of listening.” While technology “can be used productively in a way that promotes educational components,” she said, “innovation is sometimes about simplifying, focusing on what the candidates think about the most important issues.”