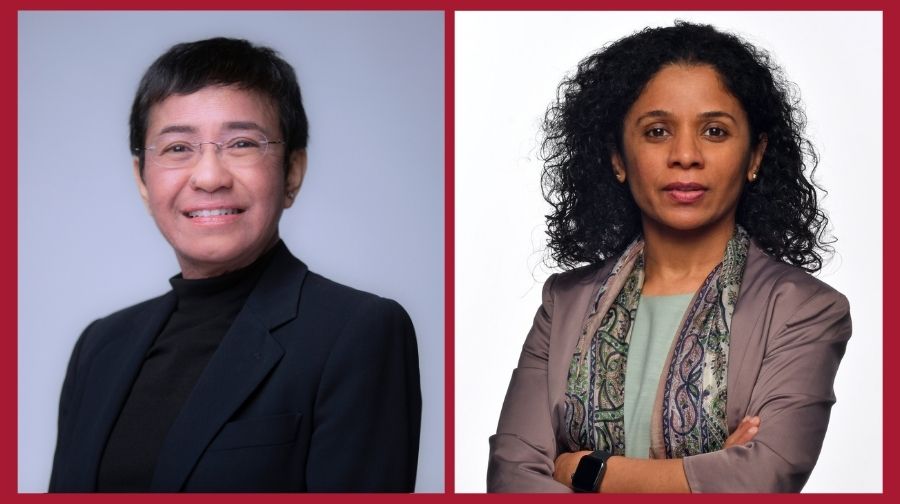 Cambridge, MA — The Shorenstein Center on Media, Politics and Public Policy at Harvard Kennedy School (HKS) is pleased to announce the appointment of two new Joan Shorenstein Fellows for the fall, 2021 semester. Maria Ressa, co-founder and CEO of Rappler in the Philippines, and Sahana Udupa, Professor of Media Anthropology at the Ludwig-Maximilians-Universität München in Germany, will join the Shorenstein Center as active members of the HKS community, conducting research and engaging with students on campus.

“We are thrilled to be welcoming two highly respected leaders in the study of the free press, disinformation and democracy to the Shorenstein Center this fall,” said Shorenstein Center Director Nancy Gibbs. “Maria and Sahana each have their own unique perspectives and areas of focus, but their studies share a common goal: to help foster the evolution of a better, safer, and more equitable internet. We look forward to hosting them on campus this semester and supporting their work.”

Since the Shorenstein Center’s founding in 1986, the Fellowship Program has been central to its mission examining the intersection of media, politics and public policy. The purpose of the Joan Shorenstein Fellowship Program is to advance research in the field of media, politics and public policy; facilitate a dialogue among journalists, scholars, policymakers and students; and provide an opportunity for reflection.

A journalist in Asia for 35 years, Maria Ressa co-founded Rappler, the top digital only news site that is leading the fight for press freedom in the Philippines. As Rappler’s CEO and president, Maria has endured constant political harassment and arrests by the Duterte government, forced to post bail ten times to stay free. Rappler’s battle for truth and democracy is the subject of the 2020 Sundance Film Festival documentary, A Thousand Cuts.

For her courage and work on disinformation and ‘fake news,’ Maria was named Time Magazine’s 2018 Person of the Year, was among its 100 Most Influential People of 2019, and has also been named one of Time’s Most Influential Women of the Century. She was also part of BBC’s 100 most inspiring and influential women of 2019 and Prospect magazine’s world’s top 50 thinkers. In 2020, she received the Journalist of the Year award, the John Aubuchon Press Freedom Award, the Most Resilient Journalist Award, the Tucholsky Prize, the Truth to Power Award, and the Four Freedoms Award.

Before founding Rappler, Maria focused on investigating terrorism in Southeast Asia. She opened and ran CNN’s Manila Bureau for nearly a decade before opening the network’s Jakarta Bureau, which she ran from 1995 to 2005. She wrote Seeds of Terror: An Eyewitness Account of al-Qaeda’s Newest Center of Operations in Southeast Asia and From Bin Laden to Facebook: 10 Days of Abduction, 10 Years of Terrorism.

Sahana founded the Centre for Digital Dignity, an international network of researchers and civil society groups, to promote the value of dignity in online discussions and foster enabling spaces of political expression. She is the author of the widely reviewed book, “Making News in Global India: Media, Publics, Politics,” published by Cambridge University Press, UK, in 2015. Her most recent publications include a commissioned research paper on digital technology and extreme speech for the United Nations Peacekeeping Digital Technology Strategy.

Previously, Sahana was Research Fellow and currently a Senior Research Partner at the Max Planck Institute for the Study of Religious and Ethnic Diversity, Germany. Prior to joining LMU, Sahana was Associate Professor of Journalism and Media Studies at the School of Public Policy, Central European University. She serves on the advisory board of MediaWell, the Social Science Research Council initiative against digital disinformation

Across ongoing research projects, Sahana’s work has traced the transforming media and urban landscapes of late capitalism. Conceptually, her work raises the question of “mediation” as a media technological, performative, and experiential space to articulate political practice. Keen to create conversational spaces between research and communities, her projects have sought to translate research findings into possibilities in the “real world,” inviting policy makers, critical scholars and students to join hands in a collaborative effort to address the “dark side” of digital communication.

As a Shorenstein Center Fellow this fall, Sahana will write a paper on Artificial Intelligence, extreme speech and the autonomy of fact checkers.