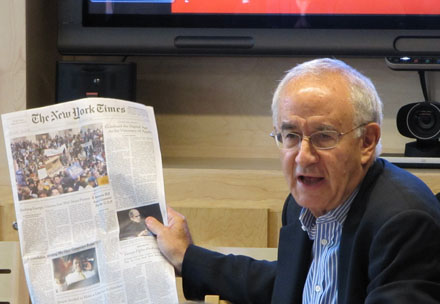 October 6, 2011 — “Times have never been tougher or bleaker,” said Peter Hart, chairman of Peter D. Hart Research Associates, at an event sponsored by the Shorenstein Center and Institute of Politics. After 50 years of public opinion polling, Hart said that he has “never felt less certain of the outcome than I do in [the 2012] election.”

Looking at the latest public opinion polls, Hart stated that only 22% of voters are optimistic about the economy, and 10% have confidence in financial institutions. “Trust has been broken,” he said. There is a “revulsion with the system.” For the first time in generations, he continued, “Americans feel that the next generation is going to be worse off.”

Obama’s job performance approval rating has fallen to 44%, Hart said. One reason for the decline, Hart argued, is the lack of “strong leadership,” which is extremely important in how the public views its leader. Mark McKinnon, Shorenstein Center Fellow and communications strategist, agreed with Hart: “People vote for attributes,” he said, “and leadership is the most important attribute.”

However, the polls seem to indicate that voters differentiate between Obama’s personality and his leadership, Hart said, as seen in the 70% of voters who say they “like him personally.” The personal element is “terribly important,” Hart said, while still admitting that there is “no way Obama is the favorite to be reelected — no matter who the Republican candidate is, Obama will be the underdog.”

The Republican Party, Hart said, “is an electorate that is searching.” There is a “new flavor every month,” and while Mitt Romney is the current frontrunner at 25% approval among voters, Hart pointed out that he has maintained that 25% level for nearly 4 years, suggesting that Republicans are “desperate to find someone else.” In fact, Hart said, it is “not inconceivable that the Tea Party may run a 3rd party candidate.”