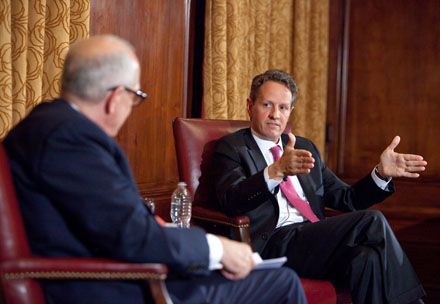 May 17, 2011 — Congress must adopt a “balanced strategy” to address the country’s long-term fiscal health and avert the looming crisis over the national debt limit, said U.S. Treasury Secretary Timothy F. Geithner at an event hosted by the Joan Shorenstein Center on the Press, Politics and Public Policy.

Geithner’s remarks came as part of a wide-ranging session moderated by Shorenstein Center Director Alex S. Jones at The Harvard Club of New York City. The forum, titled “A Conversation on the Economy and our Fiscal Challenge,” took place before a room of reporters and guests, including family members of Walter H. Shorenstein, in whose memory the event was dedicated.

With Congress now debating the highly contentious issue of raising the nation’s debt limit, Secretary Geithner reiterated his view that Congress needs to act by Aug. 2, or else risk defaulting on outstanding obligations. “It’s not the kind of thing you want to take to the edge,” he said, noting that markets could begin to react negatively if brinksmanship brings the government close to that deadline. “That itself has the same dynamics as default.”

Many fiscal conservatives in Congress are asking for deep spending cuts before signing off on any deal to raise the debt limit. On Monday, the government officially hit the debt ceiling and began borrowing from federal pension plans and using other emergency measures to continue making payments on outstanding debt.

Given that global investors are closely watching the U.S. debt negotiations, Geithner said, “It makes no sense to wait until they force action upon us.” Echoing a theme that guided the Obama administration’s policies during the financial crisis and rescue package, he stated: “Confidence is much more expensive to recover than to keep.”

On the issue of the budget, Geithner said that a mix of spending cuts must be balanced with continued investments in areas such as education, innovation and research, and clean energy, along with allowing the Bush tax cuts to expire for the top 2 to 3 percent of earners. He criticized proposals from Republicans for sharp budget cuts and no increases in further revenue generation through taxes, saying such a plan “would require implausibly deep cuts for the elderly and the poor.”

He said that if Republicans try to impose “drastic” cuts to critical government functions as a condition for raising the debt ceiling, “they will own the responsibility for the first debt default in our history,” with “devastating” consequences for America.

“There are things that we cannot do, are not prepared to do, will not sacrifice,” the Secretary said. The Obama administration, he said, is trying to establish a framework for a deal that would involve Congress imposing on itself a “debt cap,” whereby automatic cuts in future spending would take place if the annual budget process failed to meet sound fiscal practice.

Reform of the tax code may also be on hold until the larger budget and debt debates conclude, Geithner indicated in remarks at the event. “I think realistically this fiscal debate we’re having is going to dominate our preoccupation for the next couple of months,” he said.

Asked by Shorenstein Center Director Jones which of his Treasury predecessors he regards as a model, Geithner spontaneously pulled from his pocket a copy of a letter from former Treasury Secretary James A. Baker III, a Republican. Geithner smiled as he read aloud Baker’s words — which seemed to echo presciently — warning against the perils of any government default for the United States.

Geithner also made a personal aside at the opening of the event, mentioning that he fondly remembered his visits to the Harvard Kennedy School to see his uncle, Jonathan Moore, the former director of the Institute of Politics who was instrumental in founding the Shorenstein Center. In his younger days, Geithner recalled, “I remember sitting on the floor of his office for many hours.”

This article was written by John Wihbey and Janell Sims, Shorenstein Center. Photos were taken by Martha Stewart.