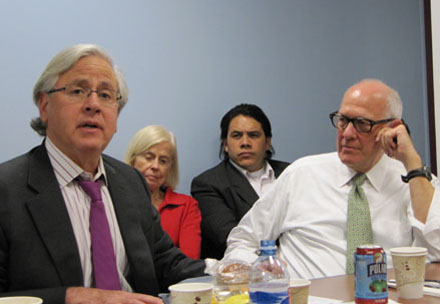 October 4, 2011 — Howard Fineman, editorial director of the Huffington Post-AOL Media Group and contributing news analyst to NBC and MSNBC, spoke to the Shorenstein Center about “HuffPost, the Web and the Campaign of 2012.”

“What AOL/Huffington Post wants to be,” Fineman explained, “is the best combination of news and community on the web.” What is unique about the Huffington Post, he said, is that it is a “combination of a news site and a social networking site” — what he calls a “news community.”

A project started by AOL is Patch.com, which Fineman described as “microlocal journalism intended to take the place of weekly newspapers in small towns and suburbs of America.” There are now 850 sites, each one with a full-time reporter/editor who publishes news online. Recently, sites have been launched in primary states: Iowa, New Hampshire and South Carolina.

When asked about the 2012 presidential campaign, Fineman acknowledged that Obama will face problems because of the “expectations that were raised for an instant fix that nobody could do.” With a weak field of Republican candidates, Fineman noted that the “money, machinery and market are available for a real third party independent effort.”

Fineman said that the lack of comity and “mutual respect,” not only in Congress but across the country, has “made the creative friction of argument spin out of control.” Large media organizations like the Huffington Post have the opportunity to bridge the partisan gap, he said, by emulating the neutral, shared “communal dinner party” of Walter Cronkite and the traditional networks, and by being “inclusive, not exclusive.”