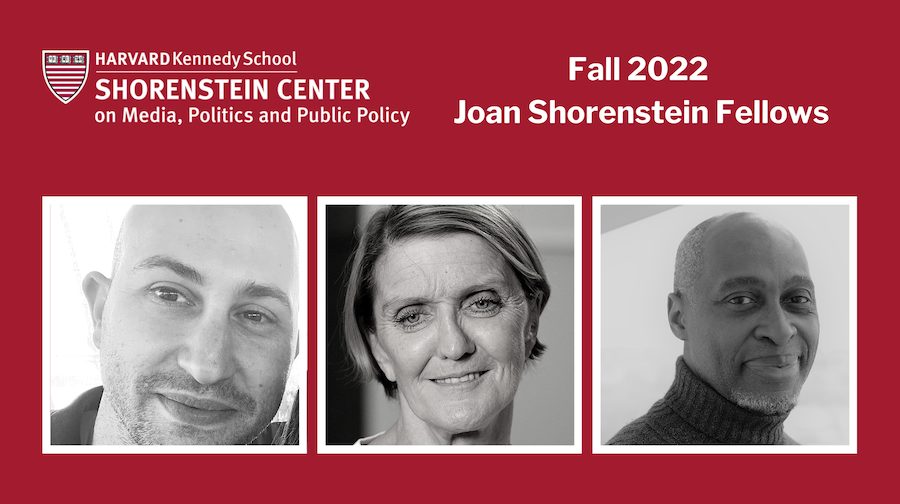 The Shorenstein Center on Media, Politics and Public Policy is pleased to announce the Fall 2022 cohort of Joan Shorenstein Fellows.

Joan Shorenstein Fellows join the center for a semester of research, events, and engagement with HKS students, faculty, and the wider university community. This semester’s fellows are working on research related to media coverage of international crises, minority groups, and social movements, and its implications on policy, equity, and democracy.

Kathy Gannon served as news director for Pakistan and Afghanistan for The Associated Press until May, 2022. She has covered the Afghanistan/Pakistan region for the AP as a correspondent and bureau chief since 1988, a period that spans the withdrawal of Russian soldiers from Afghanistan, the assassination of Benazir Bhutto, the bitter Afghan civil war, and the rise and fall of the Taliban. In addition to her coverage of South-Central Asia, she has covered the Middle East, including the 2006 Israeli war against Hezbollah in southern Lebanon, and war in northern Iraq. She has embedded with the Afghan National Army and with the Kurdish PKK movement in Iraq. Gannon was the only Western journalist allowed in Kabul by the Taliban in the weeks preceding the 2001 U.S.-led offensive in Afghanistan.
In April 2014 Gannon was seriously wounded - hit by seven bullets - while covering preparations for Afghan national elections, when an Afghan police officer opened fire on the car in which she was riding. Her colleague and close friend, AP photographer Anja Niedringhaus, was killed in the attack.
A native of Timmins, Ontario, she was the city editor at the Kelowna Courier in British Columbia and worked at several Canadian newspapers before her career took her overseas. She has received two honorary doctorates from Northern Canada universities and is the recipient of numerous awards. In 2005 Gannon authored “I is for Infidel: From Holy War, to Holy Terror, 18 Years Inside Afghanistan,” an examination of the Taliban and post-Taliban period, published by Public Affairs. She is the recipient of numerous awards, including the 2022 Columbia School of Journalism Award for lifetime achievement. Gannon is married to respected Pakistani architect Naeem Pasha, and has a stepdaughter, Kyla Pasha.
While at the Shorenstein Center, Gannon will be working on research into the "Challenges of Conflict Reporting,” in which she will examine the content of the international reporting on Afghanistan’s many conflicts, as well as its impact on policy making and public perceptions.

Seth K. Goldman is Honors Associate Professor of Communication at University of Massachusetts-Amherst, where he holds a joint appointment in the Department of Communication and Commonwealth Honors College. His research investigates the effects of mass media and political communication on stereotyping and prejudice, particularly around public opinion about race, gender, and sexuality.
Goldman is the author of The Obama Effect: How the 2008 Campaign Changed White Racial Attitudes (2014, Russell Sage Foundation), winner of the 2014 Frank Luther Mott-Kappa Tau Alpha Research Award for the best book on journalism/mass communication. His research has been published in academic journals such as the American Journal of Political Science, International Journal of Public Opinion Research, Journal of Politics, Political Communication, Political Psychology, and Public Opinion Quarterly. Financial support for his research has been provided by the Russell Sage Foundation, NSF-funded Time-Sharing Experiments for the Social Sciences (TESS), and the Face Value Project, funded by the Ford Foundation in partnership with the Carr Center for Human Rights Policy at Harvard University.
While a fellow at the Shorenstein Center, Goldman’s research will strive to answer the following question: Do media portrayals of minority groups suffering from bias, discrimination, and violence produce empathy, thus reducing prejudice and increasing support for minority rights? Or do victim narratives produce pity, thus increasing prejudice among majority group members and internalized stigma among minority group members?

Phillip Martin is a senior investigative reporter for The GBH News Center for Investigative Reporting. He is the recipient of dozens of journalism honors including two National RTNDA Edward R. Murrow awards and the 2017 Society of Professional Journalists Sigma Delta Chi award for Investigative Reporting.
A former Nieman Fellow at Harvard, Phillip Martin was NPR’s first race relations correspondent and a founding senior producer of the BBC/PRX’s public radio program, The World. He is a graduate of the Fletcher School of Law and Diplomacy at Tufts University.
Martin’s research at the Shorenstein Center is working towards a paper titled "Addressing Media Myths and False Balance in the Coverage of Antifa and The Black Lives Matter Movement".

To learn more about the Joan Shorenstein Fellowship program, and to apply for a Spring 2023 fellowship, visit shorensteincenter.org/joan-shorenstein-fellowship.