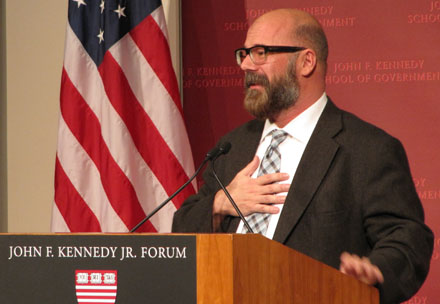 November 17, 2011 — Andrew Sullivan, political commentator and blogger with The Daily Beast, gave the 2011 Theodore H. White Lecture on Press and Politics at the John F. Kennedy Jr. Forum. In his Lecture, “Conservatism and Its Discontents,” Sullivan argued that conservatism today is in a crisis and is “unrecognizable” from its traditional heritage. Sullivan said that he “does not recognize the Republican Party as a conservative force.”

True conservatism, Sullivan said, is concerned with the “paradox of progress,” and recognizes that “society is not a formula” and that “culture matters.” He went on to argue that “the state is not the only danger to free society.” The “accumulation of power” by bankers and corporations is also a threat, and “should be subject to conservative critique.”

Preceding the Lecture, the seventh annual David Nyhan Prize was awarded to Thomas Frank, author of What’s the Matter with Kansas? and a columnist for Harper’s magazine. In his remarks upon receiving the award, Frank said that “we are living in an age of catastrophic intellectual malfunction.” Recalling political policies over the past decade, he said, “The consensus was wrong all along,” but added, “my views were outside the consensus.”