Age of Greed blames Wall Street ‘in league’ with Washington 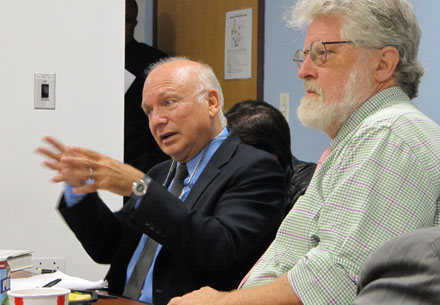 September 27, 2011 — Wall Street and Washington share responsibility for the current economic crisis, according to Jeff Madrick, who discussed his new book Age of Greed: The Triumph of Finance and the Decline of America, 1970 to the Present, at the Shorenstein Center. Madrick, a regular contributor to The New York Review of Books and editor of Challenge magazine, said that Wall Street was “in league” with Washington, as “financial deregulation was at the heart” of the crisis.

Looking back at the roots of the crisis, Madrick explained that “at the heart of financial regulation” were “vested interests” as regulators began leaving government positions for jobs in the private sector — “a good way to make a living.” The finance industry, he said, grew from “a few hundred employees…to countless thousands,” and “intense lobbying efforts” brought Wall Street interests to Washington.

Madrick also traced a “shift in ideology” that began in the 1970s when, he said, Americans were a “moderately progressive people, influenced deeply by the New Deal and the Great Society and the new frontier of the 60s.” The “catalytic event that changed it was inflation and unemployment.” “Americans panicked,” he said, and “under the influence of panic,” policymakers began blaming government, and legislated a return to laissez-faire economics. With this ideological shift “came businesses roaring,” Madrick said.

As a Shorenstein Center Fellow in 2001, Madrick wrote about financial deregulation, but focused on the media’s support of it in his paper The Business Media and the New Economy (PDF). While he acknowledged that the media “came alive” during the mortgage crisis, he still criticized their “lack of effort and understanding of the nature of the risky level of securities issued by major firms,” although he said he hesitates to blame the press, because even economists and the New York Federal Reserve “didn’t have any idea what was going on with collateralized debt obligations.”