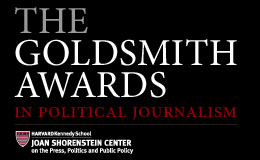 January 31, 2012 – Six finalists for the Goldsmith Prize for Investigative Reporting have been announced by the Joan Shorenstein Center on the Press, Politics and Public Policy at Harvard’s Kennedy School of Government. The winner of the Goldsmith Prize for Investigative Reporting, which carries a cash award of $25,000, will be announced at an awards ceremony on March 5, 2013 at the Kennedy School.

The Goldsmith Prizes are underwritten by an annual gift from the Goldsmith Fund of the Greenfield Foundation. The Investigative Reporting Prize, which carries a $10,000 award for finalists, is intended to recognize and encourage journalism which promotes more effective and ethical conduct of government, the making of public policy, or the practice of politics by disclosing excessive secrecy, impropriety and mismanagement, or instances of particularly commendable government performance.

“There is a lot of bad stuff going on out there, and these Goldsmith finalists highlight the importance of exposing it,” said Alex S. Jones, director of the Shorenstein Center.

The six finalists for the 2013 Goldsmith Prize for Investigative Reporting are:

The Atlanta Journal-Constitution’s year-long series on irregularities in standardized testing revealed that pressure for ever-higher test scores had led to apparent cheating by teachers and school administrators across the nation. The newspaper’s reporting, based on its unprecedented analysis of tens of thousands of test results, initiated a national conversation about the long-term effects of the accountability provisions of the federal No Child Left Behind Act.

The Goldsmith judges noted that the Journal-Constitution’s series was “a stunning feat of work and analysis” that went to the heart of the importance of the integrity of data in a world where that data is the basis of judgments and decision.

Collaboration by the Center for Public Integrity, Global Integrity and Public Radio International, with additional cooperation from members of the Investigative News Network
State Integrity Investigation

The State Integrity Investigation is an unprecedented, data-driven analysis of each state’s laws and practices that deter corruption and promote accountability and openness. Results of this series include an ever-growing number of states that have sparked or accelerated reform in government, ranging from the increase in disclosure requirements for lobbyists and government officials, to the formation of panels to explore ideas for an ethics reform package.

The judges described this finalist as “a wonderful blueprint for reporters all over the country to do the enterprising stories on government” that the Goldsmith Prizes seek to encourage. “It was a major resource for journalists and citizens.”

The Chicago Tribune’s investigative series revealed how a deceptive, decades-long campaign by the chemical and tobacco industries brought toxic flame retardants into our homes and into our bodies, despite the fact that these dangerous chemicals don’t work as promised. As a result of the Tribune investigation, the U.S. Senate revived toxic chemical reform legislation and California moved to revamp the rules responsible for the presence of dangerous chemicals in furniture sold nationwide.

“This finalist proves that you can find an important story in the most unlikely places, in this example just by looking into the cushions of a couch,” said the judges. “It is a case study in how bad problems flow from bad regulation and bad lobbying.”

The Los Angeles Times made public thousands of files documenting sexual abuse of Boy Scouts by their troop leaders, resulting in reforms that will help ensure the protection of children. The Boy Scouts of America has launched a comprehensive review of the files, with a promise to report to law enforcement any cases not previously disclosed. The Scouts also apologized to victims of abuse and offered to pay for their counseling.

“This series exposed new levels of wrongdoing and cover-up and intimidation” at an iconic institution, said the judges. “We had no idea the extent of what was happening.”

This series revealed the harsh, at times deadly conditions under which Chinese workers assembling iPhones and iPads live and work; the low pay and high turnover at Apple’s retail stores; the lengths to which Apple went to reduce its tax bill, and the shortsightedness of its conclusion that Apples couldn’t be manufactured in America. As a result of their series, Chinese working conditions and salaries have improved, Apple has announced it will invest money into manufacturing some computers in the U.S. and Congress opened an investigation into technology company tactics to reduce tax bills.

“The articles were a revealing look at the production practices of American companies that few knew anything about,” said the judges. “They exposed a disturbing insight into a glamour sector of our economy.”

In his series, David Barstow demonstrated not only that Wal-Mart’s conquest of Mexico was built on a secret foundation of corruption, but it also revealed how top executives feared exposure of their practices and made attempts to keep them in the dark. As a result of this series, the Justice Department and the Securities Exchange Commission are investigating for violations of the federal antibribery law, the Foreign Corrupt Practices Act. Wal-Mart has also radically overhauled its compliance and investigation protocols.

“It took The New York Times to get this deep look at a huge company that seemed to think it was above the law,” said the judges, and the result was “such a black eye” for Wal-Mart.