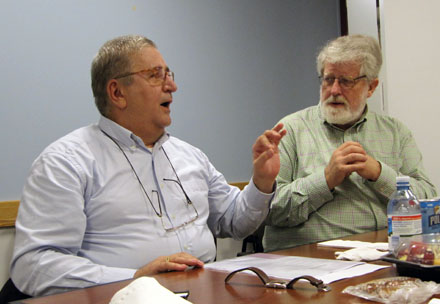 November 8, 2011 — Cüneyt Ülsever, a freelance journalist in Turkey, said at a Shorenstein Center event that Turkey is on an “open path” headed toward the “rule of one man: Erdoğan.”

Recep Tayyip Erdoğan, the current Prime Minister of Turkey and the leader of the Justice and Development Party (AKP), has provided his people with free education and supplies, as well as free heating, free housing and free healthcare, Ülsever said. “Like all totalitarian regimes,” he said, such as Muammar Gaddafi in Libya and Saddam Hussein in Iraq, “the leader is benevolent toward his people.” As a result, Ülsever said, the majority of Turkish people vote for the AKP because it “makes their lives easier.” However, Ülsever sees another side to the party and its leader, one that “is not ready to receive any kind of criticism…and any criticism makes Mr. Erdoğan really angry.”

For 12 years, Ülsever was a columnist for Hürriyet, the largest circulated daily paper in Turkey. After criticizing the government in his column, Ülsever was fired from the paper. Yet he considers himself “one of the lucky ones” because he was not among the 78 journalists who are currently in prison, accused of being “attached to a terrorist organization.”

Ülsever predicts that by 2014, the constitution in Turkey will be changed, under the guise of providing the people more rights. The new constitution, Ülsever foresees, will replace the current parliamentary democracy with a presidential system. “Obviously, Erdoğan will run for presidency,” Ülsever said, “and will get rid of ministers, appoint secretaries…and he’ll take over.” By that time, Ülsever warned, there will “openly and legally be a country ruled by one person.”