The Root’s Donna Byrd: How to grow online communities 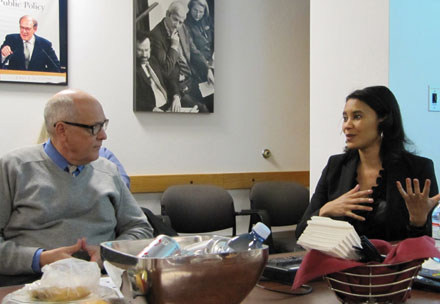 March 22, 2011 — At a Shorenstein Center event, Donna Byrd, publisher of The Root, shared her experience in growing and engaging an online community.

Byrd opened with a brief history of The Root. It was the “brainchild” of Washington Post Company chairman Donald Graham and Harvard professor Henry Louis Gates who in 2007 looked at the African American media space and found that, with few exceptions, “all of the properties online were focused on gossip and entertainment.” They saw an opportunity “to create a site that focuses on news and commentary from an African American perspective, and make it really smart and witty.”

The timing of the launch was important, Byrd explained. In January 2008, weeks away from Obama winning Super Tuesday, The Root came on the scene. At that time, Byrd explained, “the general media was scrambling to find new voices and perspectives,” because their “go-to people…were not outwardly supporting Obama.” So The Root seized the opportunity to introduce “smart, thoughtful writers to the mainstream discourse.” The Root’s different perspective “filled the gap” between the general media and African American media, she said.

Even after the election of an African American president, Byrd observed, management and staff teams of most U.S. news organizations lack ethnic diversity. However, “niche sites such as The Root allow broader and often different perspectives to surface to the mainstream dialogue,” she said. In fact, “sites that are niche-focused primarily are the ones that have experienced significant growth” over the last few years. “Finding a niche, finding a voice that is unique in the market provides a significant opportunity for you to grow your audience,” she advised.

Byrd outlined several key elements in growing and engaging an online community. Providing new content several times a day is essential in increasing traffic to the site, she observed. Social media tools, such as Facebook and Twitter, are “critical parts of growing communities online,” she said, because they share the news and commentary from the site with a community. Podcasts have also proven to be very popular and a way to drive traffic. Design is “extremely important in expressing and establishing yourself in the market,” she said. In addition, Byrd emphasized the importance of SEO (search engine optimization): “It’s by far the most important thing about a website.”

The Root is a for-profit enterprise, and Byrd said she expects the site will be profitable in 14–16 months. Facing the site now is the decision of how to grow: whether to keep the focus on the current target audience, or seek a broader audience by focusing more on entertainment. Byrd said she is confident that no matter the outcome of the decision, “The Root will always provide good quality content—smart, witty, thought-provoking content—in our media space.”

← Facebook executives share insight at Harvard Kennedy School
In the Shadow of the Japan Crisis: The Seesaw Coverage of Nuclear Power →