Post‘s Ignatius: Obama is ‘idealist learning to be realist’ 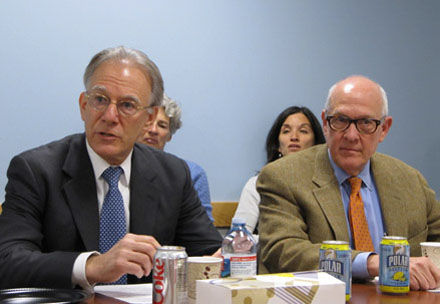 April 3, 2012 – President Obama is less comfortable with exercising power publicly than privately, said David Ignatius, associate editor and columnist for The Washington Post, at a Shorenstein Center event. “As covert Commander-in-Chief, [Obama] has been quite effective,” he continued. While he is “reticent, reluctant to use the public political tools of power, in private…he is quite decisive.”

Ignatius outlined several characteristics of the president that he has observed while covering the White House and foreign policy. Obama “doesn’t really like politics,” Ignatius noted, “and he’s not really very good at it.” Unlike Bill Clinton and Lyndon Johnson who were “energized” by political interactions with other people, Obama is more “reserved, not needy.”

Describing Obama as a “hedge-your-bets” Commander-in-Chief, Ignatius gave an example of Obama announcing in 2009 a surge of 30,000 troops to Afghanistan, while also setting a 2011 deadline for the beginning of the removal of those troops, thereby “vitiating the very policy he was announcing.”  Obama was “looking for a way out even as he announced that he was going in deeper,” Ignatius explained.

Obama is an “idealist who is learning to be a realist,” said Ignatius. He came to the White House with “big dreams,” and an articulated “vision of engagement with Iran” that included ways to open up dialogue, but his efforts were rebuffed. His Cairo speech in 2009, Ignatius added, was another example of the president’s “idealistic vision for change in the Middle East, largely frustrated.”

Ignatius concluded that the president has “learned a lot,” and if reelected, will return to many of the same issues in his first term, but this time, “with more discipline and realism.”