in Audio & Video, Past Events 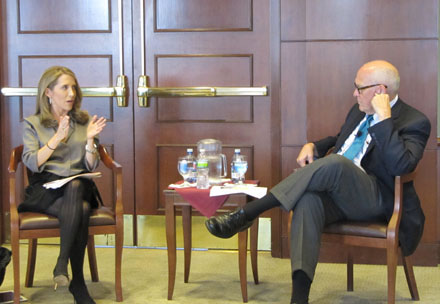 September 13, 2011 — At the first installment of the Fall semester speaker series, the Shorenstein Center welcomed Jessica Yellin, Chief White House Correspondent for CNN, to speak about “Covering the White House in a Bare-knuckled Media Culture.”

Yellin outlined several “hazards” of working in cable news. First, the “rise of everyone as a reporter” has a great impact on her job. With a show of hands, the audience identified itself as people who blog, Tweet, and use smart phones with cameras — Yellin told them, “Your ability to report and participate in the newsgathering process impacts what I do in a very real sense. It makes it quicker and faster and my need to respond more immediate.”

Yellin sees another trend in the news industry: “Some outlets are moving toward more detailed coverage with less context.” She gave the example of Bloomberg which is “looking for reporters who will get market-moving insights.” Likewise, Politico is committed to “covering the minutia of the legislative process.” Both outlets are striving to provide substantial intelligence that will benefit their niche readers, but without providing larger context. At various cable networks, Yellin added, “anchors often have a bias,” but she clarified that “reporters are doing very straightforward reporting” — a distinction that is often “lost on viewers.”

These shifts in the newsgathering business combined with lack of funding for print reporting, mean “fewer and fewer outlets covering context,” Yellin said. “They’re covering either details or minutia or snippets,” but they are neglecting a “meaningful environment for viewers.” Yellin says she sees her responsibility and the role of CNN to provide that missing context, “within the confines of providing entertaining news.” For example, during the debt ceiling debates, instead of focusing on the particular argument of the day, Yellin explained that CNN reporters would “constantly go back to remind viewers it could have been done a long time ago, this is a fight that could have been avoided.”

When asked how President Obama is doing in the polls, Yellin released the latest numbers from CNN’s polling unit. After his recent jobs speech, the president’s numbers have gone down, she said, but nominally — “within the margin of error.” His approval in late August was 45%; it is now down to 43%. When poll respondents were asked if they favor or approve of what Obama said in the jobs speech, 22% said they didn’t know. Yellin observed that “this is meaningful because it sounds like a lot of people aren’t paying attention.” However, when asked about the “personal likability” of the president, 8 in 10 people responded positively. Yellin pointed out that this number is crucial to the Obama campaign for 2012.